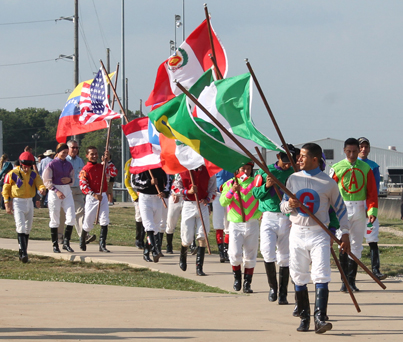 The second annual World Jockey Challenge will include 31 jockeys from 10 different countries over 10 races on Saturday, June 27. The event will be one of the highlights of International Fest complemented by strolling entertainment, RushShelby Energy Family Fun Night, and food and beverage specials representing various countries.

Jockeys will compete for their respective countries as teams during the evening. Points will be based on the first four finishers of each race with the winning team being declared the winner of the World Jockey Challenge. Last year’s inaugural Jockey Challenge provided a showdown to the last race between the United States and Mexico with United States earning the most points to earn the award. Points are awarded as follows: 10 points for first, 5 points for second, 3 points for third and 1 point for fourth place.

Countries represented in 2015 include the United States, Mexico, Panama, Peru, Venezuela, Puerto Rico, Virgin Islands, England, France and Italy. The competition includes both Thoroughbred and Quarter Horse jockeys with the United States having the most team members with nine jockeys. Team Mexico is close behind with eight jockeys followed by Panama (4), Peru (3), Puerto Rico (2), Virgin Islands (1), Italy (1), France (1) and England (1).

Earlier in the week, De La Cruz, 2014 leading jockey, and Olivo, one of the leading Quarter Horse jockeys, were special guests on 107.1 FM’s Radio Latina. The jockeys talked about their jobs and also about the competition in the World Jockey Challenge. De La Cruz is from Peru while Olivo will be part of the team from Mexico. Radio Latina 107.1 FM will be on property broadcasting live during International Fest, adding more flair to the theme of the night.

To help set the stage for the night, strolling Polynesian dancers will provide a colorful entertainment display trackside while each of the outdoor food stands will offer $4 specials. Bears BBQ will feature Churrasco marinated beef brochettes from Brazil and Anticuchos de Pollo, spicy chicken brochettes representative of Venezuela. Le Grande Taco Stand will provide barbacoa “Street” tacos of Mexico and Ceviche, a citrus marinated fresh fish from Peru. Hoosier Burgers & Derby Dawgs will provide chicken empanadas from Panama and Canoas, stuffed ripe plantains from Puerto Rico. In addition to the food options, a special beer garden will be in place trackside to highlight beers from around the world.

The 13th season of live Thoroughbred and Quarter Horse continues through Saturday, Oct. 31, 2015. Racing is conducted Tuesdays, Wednesdays and Fridays at 2:05 p.m. with first post Saturdays set at 6:05 p.m.