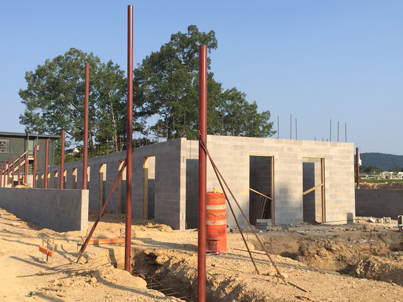 Oaklawn has begun construction of a new barn that will replace one of the oldest barns in the stable area and will be ready for the 2016 live racing season.

The new barn, a steel beam and cinder-block wall construction, replaces Barn #2, one of the few remaining older, wooden barns in the stable area. It will be very similar to the last barn constructed between the 2006 and 2007 live seasons — named after Smarty Jones. No word yet on what famous racehorse with ties to Oaklawn the new barn will be named for.

“Long-range, we’d eventually like to replace all of the older barns with more modern structures,” Oaklawn Plant Superintendent John Hopkins said. “We’ve come a long way toward that goal already.”

The removal of Barn #2, along with another structure that was used by the maintenance department, will allow Oaklawn to gain hundreds of additional public parking spaces. In addition, the oldest horse path to the racing surface is also being replaced by a new on/off gap positioned on the south turn.

“Oaklawn has always been committed to racing first and it’s exciting to be in a position where we can make improvements year after year to our racing program and stable area,” Director of Racing David Longinotti said. “Having Rebel Stakes and Arkansas Derby winner American Pharoah become the first Triple Crown winner in 37 years was the most exciting moment in the history of Oaklawn, and we’re looking forward to continuing that momentum into next year.”