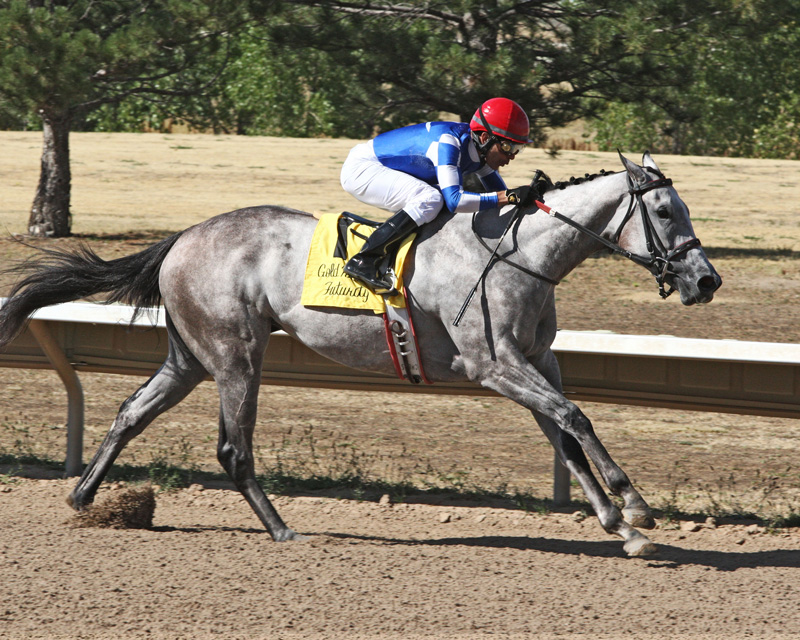 Texas-bred Bling On the Music became the first filly to defeat male horses in the six furlong, $100,000 Gold Rush Futurity at Arapahoe Park on the Colorado track’s final day of the 2016 season on Sunday. She also won by the biggest margin, 13 lengths, in the race’s history. The 2-year-old filly owned by Danny Keene’s Keene Thoroughbreds, who also won the 2015 Gold Rush Futurity with Texas Chrome, remained unbeaten in three starts as she challenged Crosscheck Carlos for the early lead before leaving her competition behind.

“She’s a really nice filly,” jockey Luis Quinonez said. “The other horse [Crosscheck Carlos] tried to go with me, and she was able to relax and had her ears pricking. She ran just like she did in Texas.”

Bling On the Music, who is trained by J.R. Caldwell, also won the Texas Thoroughbred Futurity at Lone Star Park on July 9 by a similarly dominant 8 1/2 lengths. In her only other start, the daughter of Too Much Bling won broke her maiden by nearly five lengths at Lone Star.

Bred by W.S. Farish, Bling On the Music sold for a sale-topping $95,000 at the Texas 2-Year-Olds in Training Sale from the consignment of Asmussen Horse Center. The filly has now earned $128,882 for Keene.

Last year, Keene also swept the Texas Thoroughbred Futurity (then known as the TTA Sales Futurity) and Gold Rush Futurity with another Texas-bred in Texas Chrome,  trained by Shea Stuart. As a 3-year-old, that son of Grasshopper has added two stakes wins and two graded stakes placings, including a second in the $250,000 Iowa Derby (G3), for trainer J.R. Caldwell.

This latest victory for Bling On the Music pushed her sire Too Much Bling into the top 15 nationally among juvenile sires. The stallion is also tied for first with three 2-year-old stakes winners this year. Too Much Bling formerly stood at Farish’s Lane’s End Texas and will stand the 2017 season at Valor Farm in Pilot Point, Texas, as will Grasshopper.

Louisiana-bred Crosscheck Carlos, who is owned by a partnership that includes Colorado Avalanche defenseman Erik Johnson, held on for second in a photo finish with Karlo Lopez aboard. Crosscheck Carlos had won the D. S. Shine Young Futurity at Evangeline Downs in Louisiana on July 16 following a debut victory at Santa Anita in California.

Fillies finished in three of the top-four places in the field of nine, as Colorado-bred Galactic Princess and jockey Russell Vicchrilli were third and McKenzie Honey and jockey Nathan Haar took fourth.

3 thoughts on “Texas-bred Bling On the Music Makes History in the $100,000 Gold Rush Futurity at Arapahoe Park”