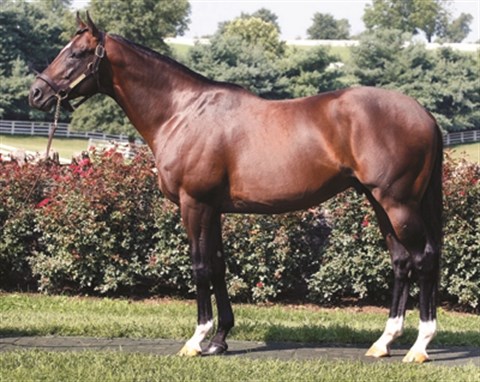 American Lion, a multiple graded stakes-winning son of Horse of the Year and two-time Breeders’ Cup Classic (G1) winner Tiznow, has been relocated to Francisco and Lori Bravo’s River Oaks Farms in Sulphur, Oklahoma, for the 2017 breeding season. He will stand for an introductory fee of $1,000 as property of a partnership. The 9-year-old stallion, who is out of the Storm Cat mare Storm Tide, formerly stood at Darby Dan Farm in Kentucky.

“We are excited to be standing him in Oklahoma,” said Francisco Bravo. “As a multiple graded stakes winner and a strong contender on the Kentucky Derby trail, he’s the most accomplished son of Tiznow to stand in this region.”

American Lion won two of three starts as a 2-year-old, with a daylight maiden victory at Keeneland and a score in the Grade 3 Hollywood Prevue Stakes in California. As a 3-year-old, he finished third in the Grade 2 Robert B. Lewis Stakes at Santa Anita and then won the Grade 3, $500,000 Illinois Derby at Hawthorne. He also ran in the Grade 1 Kentucky Derby, finishing 11th, and retired with earnings of $417,800 from nine starts.

American Lion’s first crop of runners are 3-year-olds of this year. His leading runner is $248,734 earner Extinct Charm, who won last year’s $100,000 Damon Runyon Stakes at Aqueduct and finished second in this year’s $154,500 Betfair.com Pegasus Stakes (G3) at Monmouth and $164,150 New York Derby at Finger Lakes.