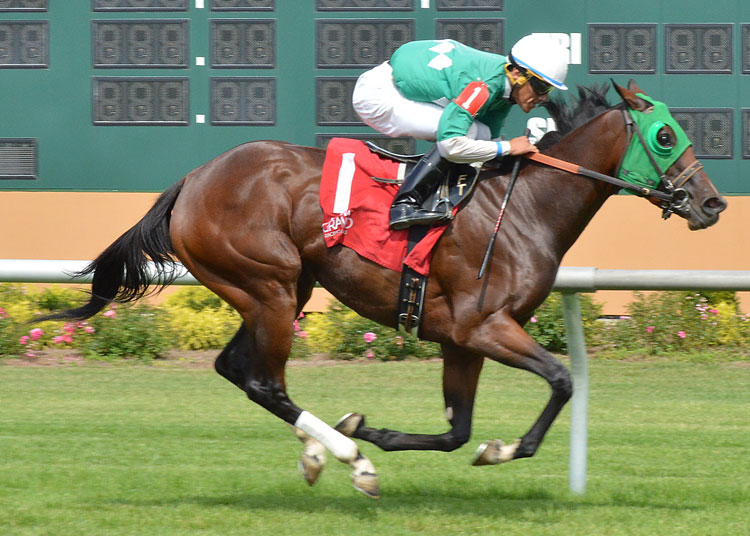 Indiana Grand on Wednesday held a pair of six-figure turf stakes for Indiana-breds as part of a big week of racing culminating with the Grade 2 Indiana Derby on Saturday.

Tequila and Salt was able to shake things up in the eighth running of the $100,000 Ellen’s Lucky Star Stakes. The 3-year-old filly by Limehouse powered to the lead to take home the title in the one-mile turf race.

Guided by Francisco Torres, Tequila and Salt was the first name called out of the gate and grabbed good positioning on the inside of the field of nine from post one. She had company early but by the time the field approached the first turn, she was the clear-cut leader. Around the turn, Luna Dancer and Dick Cardenas moved up, sitting patiently on the outside of Tequila and Salt heading into the final turn.

Torres got Tequila and Salt into gear before the stretch arrived and once the filly straightened out, she was pulling away from the field. Torres kept the homebred filly at task and powered under the wire in a time of 1:38.30, two lengths ahead of Express Run and James Graham for second. Trainer Mike Lauer had a profitable day in the Ellen’s Lucky Star, earning the third spot with Seven Seize and Rodney Prescott and Dance Line and Miguel Mena for fourth, giving him three of the top four finishers in the race.

Overlooked by bettors, Tequila and Salt paid $14.40, $6.80, $6.20 across the board. It was the first win of the year in five starts for the Penny Lauer-owned filly raised from their mare Perth Lassie. Trainer Mike Lauer was not in the winner’s circle. He missed the afternoon card to attend the National HBPA Summer Convention held in Vancouver, British Columbia, Canada.

“When I rode her (Tequila and Salt) last time in the stake (Hoosier Breeders Sophomore Fillies Stakes), we were pressed pretty fast fractions,” said Torres. “Despite that, I thought she finished really well to finish second. I was surprised she finished as well as she did. I didn’t want her to be pressed today, and I wanted on the lead. We got there very easily and were able to take control of the race. It sat up perfectly for us today.”

Tequila and Salt more than doubled her career earnings to more than $118,000. The lightly-raced filly now has two wins in 10 career starts.

It was evident that Jockey Malcolm Franklin had a ticket to ride on the express in the eighth running of the $100,000 Snack Stakes. Derby Express got the jump on his opponents out of the gate and never looked back, scoring the win by six and one-quarter lengths in a time of 1:36.89 for the one mile turf event.

Franklin sat patiently on Derby Express waiting for the gate to open. He had a game plan to get to the lead early and that is exactly what happened. The duo shot out of the starting gate and stopped the timer in :22.99 seconds for the first quarter. They kept on rolling down the backstretch and it as if there might be some late closers planning their attack, but the attack never happened.

In the stretch, Derby Express continued to extend his lead on the field and was under the wire easily ahead of the rest of the full field of 12. Conquest Stormy and Miguel Mena made a strong move late to move into second over R Luckey Charlie and Richard Bracho for third.

“I know the fractions looked fast, but he (Derby Express) was doing it really easy today,” said Franklin. “Every time a horse would come up to him, he would take off. He broke sharp today and was strong all the way through the race.”

Derby Express, bred by Greenhill Racing and owned by Sheri Greenhill and trained by Jeff Greenhill, paid $28.00, $9.20 and $6.80 across the board. After a stellar season at two, it was the first sign of returning to that form for the son of Unbridled Express this season and his first trip to the winner’s circle.

“He (Derby Express) had a little setback at the end of the year last year,” said Franklin. “I just think he lost his focus. Jeff (Greenhill) added blinkers for the first time today and I think that really helped.”

Greenhill, who has a string of horses at Indiana Grand, was not in attendance to see Derby Express win his third career stakes race. Greenhill accompanied one of his other horses to Thistledown for a race. Derby Express increased his career earnings to just under the quarter-million dollar mark with his win in the Snack Stakes. The small but mighty colt is now five for 10 during his career.