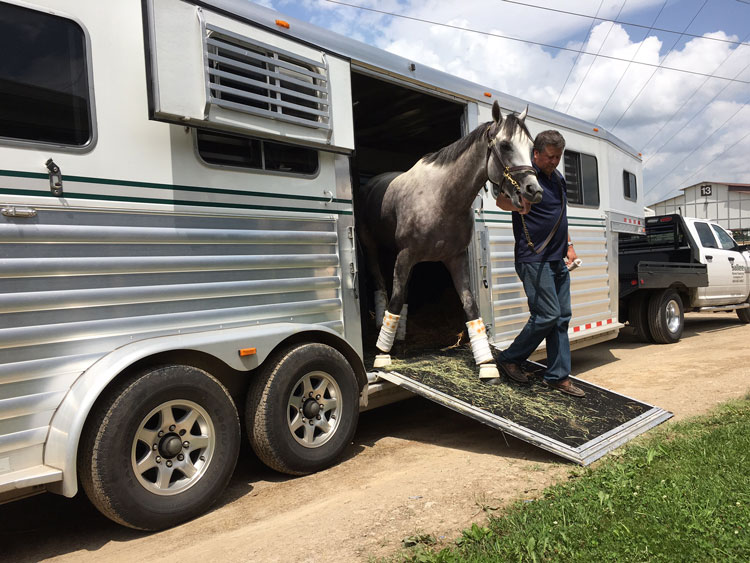 A capacity field of 12 3-year-olds were entered Wednesday for Saturday’s $500,000 Indiana Derby at Indiana Grand. But to trainer Bob Baffert, the Grade 2 race comes down to two horses.

One is the Cupid that won a Santa Anita maiden race by 5 1/4 lengths in fast time in his first start around two turns, then followed it up by leading all the way to defeat a good field in Oaklawn Park’s Grade 2, $900,000 Rebel Stakes. That made him become something of a fashionable “wise-guy” pick for the Kentucky Derby.

The other is the Cupid of his past two starts, including languishing home 10th by a total of 11 1/4 lengths as the odds-on favorite in the Arkansas Derby when he returned to Oaklawn from California a month later. He underwent a throat procedure to correct a breathing obstruction that surfaced in the Arkansas Derby, knocking him out of the Kentucky Derby and possible Preakness berth. However, Cupid again faded to last of five, beaten 10 lengths, when he resumed racing in Belmont Park’s non-graded Easy Goer Stakes.

“He needs to fire, needs to show up,” Baffert said by phone from California after Cupid drew post 11. “He didn’t show up the last two times. If he shows up, he’ll be tough, no matter what post he’s in.”

Bill Downes, Indiana Grand’s odds-maker and track announcer, made the late-running Cherry Wine the 5-2 morning-line favorite, given his good efforts in some of the biggest races for 3-year-olds: a second in Pimlico’s Preakness after being a close third in Keeneland’s Toyota Blue Grass. The speedier Cupid is the 3-1 second choice. However, he wouldn’t be a surprising post-time favorite, given the way Baffert horses get bet. Rafael Bejarano comes in from California to ride.

Baffert said Cupid had no problem getting his air in his last race.

“The throat isn’t even an issue now,” he said. “The Easy Goer was one turn. He broke a step slow, was behind, and when he (Florent Geroux) pulled him to the outside, he just took off. He was fighting him the whole way. Even Florent said the one turn was not good for him. He’s a two-turn horse. He feels more comfortable, has got to get in his groove.

“… If he doesn’t run well here, we’re just going to stop on him, give him some time off. Because he’s training too well. We were shocked how poorly he ran last time.”

Cherry Wine and Cupid have faced each other once, with Cherry Wine fourth in the Rebel in his first start since a brief illness kept him out of Gulfstream Park’s Fountain of Youth.

“I really didn’t think I’d run him back this quick,” Romans said. “I was going to give him a little bit more time, but we’re right here at home in our backyard, going up to Indiana. They do a lot for horsemen and we want to run him around the Midwest and pick up a big pot if we can.

“The Belmont is the Belmont. It’s a classic race. He ran mid-pack and didn’t embarrass himself. But he probably doesn’t want to go a mile and a half. People have a misconception that a mile and a half is great for a closer because you have more time to catch up. But by the time you hit the quarter pole, they’re all getting tired in a mile and a half race. If you look over history, it’s a horse who’s closer to the pace who does better. I think Cherry is a horse that needs to settle, get pace in front of him and come running.”

Cherry Wine still is looking for his first stakes victory, and Romans said the 1 1/16-mile Indiana Derby is a “race to knock out in and of itself.” But he said it does provide options for down the road, including potentially how best to get to the Breeders’ Cup Classic.

“You can go here and if we decide to go back to the Travers, we could,” Romans said. “Or even something like the Pennsylvania Derby. And I’ve even been thinking a little bit about the grass for him. You could go in the Secretariat on the grass on Arlington Million Day.”

“I couldn’t have better posts,” Romans said. “One (Takeittotheedge) will be close and the other will be laying last.”

The co-third choices at 6-1 are Churchill Downs’ allowance winner The Player and Star Hill, who has finished third in three of his four graded-stakes races this year but seeking his first stakes triumph.

Buff Bradley, the trainer as well as co-owner and breeder of The Player, was delighted with drawing post 5, especially with Cupid almost to the extreme outside. The Player appears to be the only horse in the field who can match Cupid’s early speed.

“I think we had a great draw, right where you need to be,” said Bradley, who also is based at Churchill Downs. “Not stuck down on the rail, yet not hung way out to dry either. Cupid is going to have to work a little bit harder to get to that first turn and be where he wants. At least we can sit and see if he’s really going to clear us. If he doesn’t go and doesn’t clear us, then we’re probably going to be right up there close to the lead. I think we could be close to the front without even sending.”

Star Hill, who is stabled at Keeneland, drew post 12, his fourth straight race starting very far out. The Calumet Farm colt broke from post 12, 13 and 13 in his prior three races.

“How many are in there? Twelve?” trainer Rusty Arnold, when told Star Hill’s post, said with something of a gallows-humor laugh. “I couldn’t get the 13 anyway.

“What are you going to do? You draw, and you get those posts. He’s just been on an unlucky run. He’ll probably get the 1 next time. I think I rather have the 13.” — Jennie Rees