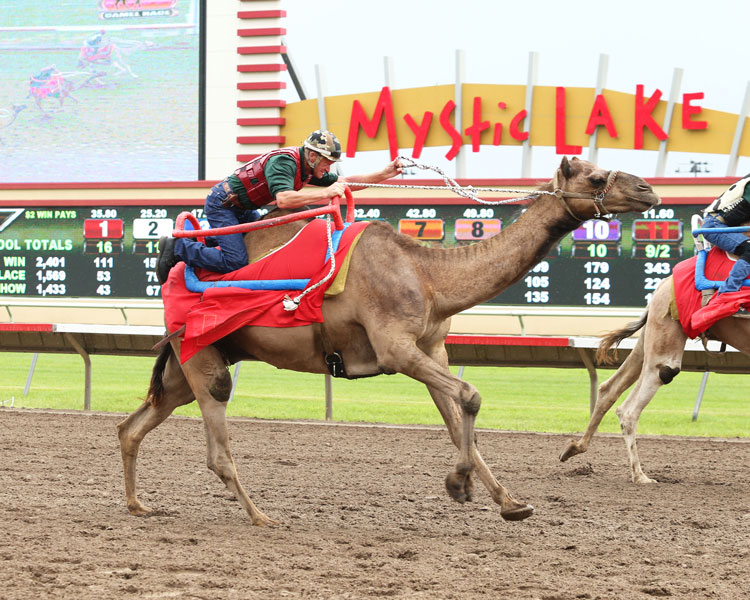 Canterbury Park’s Extreme Race Day, now in its tenth year, will be held Saturday, July 16 at the Shakopee, Minn. racetrack. Exhibition races with camels, ostriches, and zebras are the main draw on Extreme Race Day, last year’s attendance exceeded 15,000, but the annual Battle of the Surfaces also has become a fan favorite. This pari-mutuel race, unlike any other in the nation, will feature 19 horses, the largest field in North American racing in 2016 other than the Kentucky Derby, competing against each other simultaneously at one and one-sixteenth miles on the turf and one mile 70 yards on the dirt.

The two starting gates will be staggered so that the final time of the race is approximated to be the same for both the turf and dirt.

“We have tweaked the distances this year,” Director of Racing Operations Andrew Offerman said. “Last year the dirt horses dominated.

“The condition of the turf course and dirt track are factors as is the class of the horses competing,” Offerman added. “We are hoping for the closest finish between the two surfaces that we can get.”

The starting gate stalls on each surface will open in unison and the race ends at the same finish line in front of the grandstand. Twelve thoroughbreds have been entered for the turf and seven for the dirt.

Each horse will be an individual betting interest with win, place, show, exacta, trifecta, and superfecta wagering offered. The race also is the first leg of the 50 cent Pick Five wager. The order of finish will be determined by best finish position regardless of which surface the horse is racing on, so it is possible to have an exacta payoff comprised of a horse racing on the turf and a horse racing on the dirt. The Battle of the Surfaces will be the sixth race on a 10-race program.

Canterbury Park was the first track to successfully attempt such a race when it debuted during the 2007 Extreme Day. The Battle of the Surfaces was the brainchild of Canterbury’s Vice President of Racing Eric Halstrom.

“We have continually made adjustments to the distances to make this an exciting and unique event that race fans and bettors will only experience at Canterbury Park,” Halstrom said. “This really is a one-of-a-kind wagering opportunity.” Last year the Battle of the Surfaces handled more wagering dollars than any other race on the program.

Ostriches, camels, and zebras will again be a part of Extreme Race Day, presented by the Minnesota State Lottery, with exhibition races being conducted throughout the afternoon.

Horse racing begins at 12:45 p.m. General admission is $9.00 for adults. Children 17 and under are admitted free. Parking is free. Family Day activities including pony rides, face painting and a petting zoo, will also be offered.

More information is available at www.canterburypark.com.