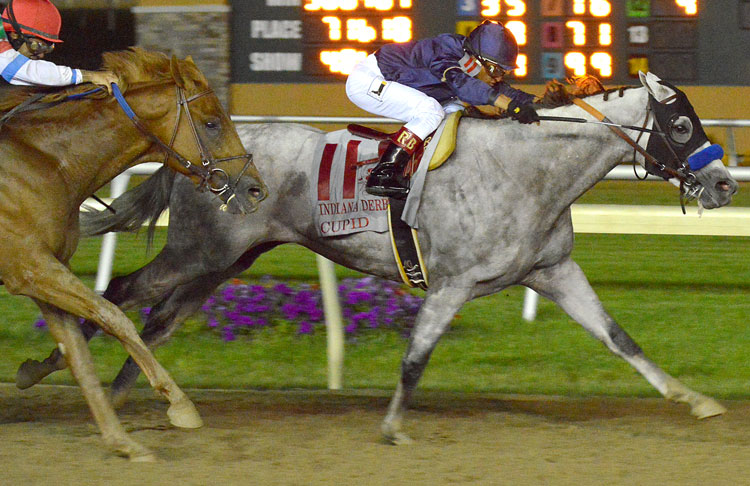 The good Cupid showed up for Indiana Grand’s $500,000 Indiana Derby on Saturday night, and the result was a hard-earned victory by three-quarters of length while fending off The Player’s late surge.

Hall of Fame trainer Bob Baffert won Indiana’s biggest horse race for a record fourth time in absentia. He was at a nephew’s wedding in Mexico, with the race going off during the ceremony.

“This thing just ended, just getting over,” he said by phone. “I didn’t see it. I was in the church there, and I was just hoping that my phone would start going off a lot, because that’s a sign of victory. Because when it’s quiet, it’s not good. All of a sudden, I felt it buzz and buzz and buzz.

“I haven’t even talked to Jimmy (assistant trainer Jimmy Barnes)… I don’t even know who ran second… I’m just happy for the horse. His last race was so disappointing.”

Yes, Cupid showed heart in the Grade II race after being drubbed in his prior two starts: finishing 10th in the Arkansas Derby, after which he underwent throat surgery to correct a breathing obstruction, and then a bad last of five in Belmont Park’s non-graded Easy Goer Stakes. So in the Indiana Derby, handicappers had to decide whether the Cupid who won Oaklawn Park’s Grade II Rebel Stakes to look like a Kentucky Derby contender would resurface, or if the prior two fiascos were the new norm.

Cupid did not have things his own way. Long shots Pilot House and Cocked and Loaded going out for the lead to force jockey Rafael Bejarano to use Cupid more than he wanted from post No. 11. The Player and Call the Colonel provided pressure from the next flight as well, pushing Cupid through a challenged first quarter-mile in 23.44 seconds and the half-mile in a testing 46.75.

Bejarano finally got Cupid on a clear lead on the far turn, covering three-quarters of a mile in 1:10.86. He still had a length lead in mid-stretch but The Player was making a late run under Shaun Bridgmohan that came up short as both horses ran greenly in the lane.

“That was an exciting race, needless to say. We were all over the place,” Barnes said right after the race. “It was a wildly run race. For us being in the 11 hole, he had to really get him running early to get over on the turn. I mean we were wide enough as it was, and then had to use him to get there. Then it looked like once he got him in his cruising (gear), we were good. Late down the lane, I don’t know it was. He was still on his left lead, he was leaning in, he was all over the place. could be from being tired, looking, being green. Anyway, we got it done.”

Barnes said Cupid was tough to saddle in the paddock.

“I took it as a bad sign at first,” he said. “But then a good sign once I got him out of there. Once I got him on the track, he was fine. He was ready to run, ready to go.”

Bejarano admitted he was a little concerned about all the pressure early in the race but that Cupid finally got comfortable midway through the far turn.

“I had pretty much pressure in the beginning,” he said. “But after the three-eighths to the quarter pole, finally I got him by myself on the lead. I tried to hold him as long as I can and give him a little air to come to the stretch and to give me something extra.

“… He showed a big kick in the stretch. I think he saw something and he was kind of panicking a little bit in the last sixteenth-mile and he was switching his leads back and forth and he tried to go to the rail. But that’s why he reacted. Because he never did that before.”

“He needed to win this race,” Bejarano said. “This horse, he wasn’t having too much luck, breaking from the gate and having bad trips. I was hoping to have a good race today.”

Cupid, who will fly back to California on Tuesday, now has three wins and a second in seven lifetime starts, the $285,696 bringing his earnings to $880,553. Owners Michael Tabor, Mrs. John Magnier and Derrick Smith paid $900,000 for the attractive gray son of Tapit at Keeneland’s 2014 September yearling sale.

The Player showed he indeed is a player on the 3-year-old scene. It was his first race in a stakes and around two turns.

“He was ‘climbing’ a lot on the first turn, I think he had more dirt hitting him,” said Churchill Downs-based trainer Buff Bradley. “He’s been in the clear. And we actually two works back we stuck him behind a horse and made him eat some dirt. But it’s not like you’ve got four of them up there throwing dirt at you.

“Shaun did a great job with him. Shaun said the same thing going around the first turn that he was climbing and hadn’t settled. But once he got on the backside, he thought the speed would come back a little bit. Don’t take anything away from the winner – there were a lot of horses who tried him around the turn to try to soften him up for us. We just couldn’t get there. But the big positive we take out of this, providing he comes back healthy, is we see he can go two turns now and Shaun said, ‘you can let him go farther is you want.’ He said, ‘the more races he gets in him, the better he’s going to be too.’ I have no problem how everything went throughout the race.”

Said Bridgmohan: “He was jumping up and down in the first turn which is unlike him. He wasn’t handling the dirt, the kickback, very well. I thought after that he leveled off and tried really hard. I thought it was a gallant effort on his part.”

Bradley said at the top of the stretch, he was just hoping The Player would just hang on for second. “Then about the sixteenth pole, I could see he was still trying to get there,” he said. “He was getting there, just slowly. Too slow.

“We got outrun by a good horse today. I tell you what, Cupid really bounced back and showed he’s a pretty nice horse today, the way he ran. He could have come back to us any time, and he never gave an inch. But for the Player, I think he ran an awesome race. You always want to get that win. But I saw a lot of positives and know we could move forward.”

Star Hill, who drew an extreme outside post for the fourth straight race, closed from ninth to finish another 2 3/4 lengths back in third, with Whateverybodywants a distant fourth, followed by Seeking Blame, Pilot House, Cocked and Loaded, Discreet Lover, Cherry Wine, Call the Colonel, Takeittotheedge and Torrontes.

“I said (to Corey Lanerie), ‘Is there a chance he doesn’t want to go that far?’” said Rusty Arnold, trainer of Star Hill. “He said, ‘I can’t tell because I’m fighting for a spot all the time.’ … But I’m happy with him. He’s had some tough draws.”

Said Lanerie: “I started out a little wide going into the second turn, but by the time I turned the corner I was right behind Cupid and The Player. I actually thought I had them. My horse was traveling really really good. When I sat him down, he gave me a nice eighth of a mile run and then he kind of hung a little bit, so me and Rusty we don’t know if the distance may be a little questionable or if I need to sit a little longer on him.”

The big disappointment was Cherry Wine, the Preakness runner-up and second choice who was last most of the way before passing three tiring horses.

The entire Indiana Derby Night program brought in a total handle of $3,156,859 shattering the track’s previous all-time best handle of $2.7 million. Also, a crowd of 12,974 was in attendance to set a new record for the race. The actual Indiana Derby race also set a new record for handle, with $914,311 wagered on the 12-horse field, the largest in the 22-year history of the race. Cupid also becomes the first grey horse to ever win the race, which is Indiana’s richest horse race of any breed.