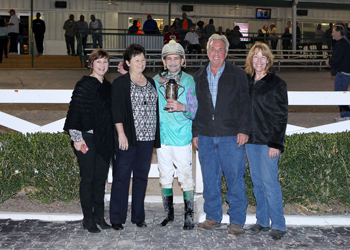 Delta Downs’ 2013-14 stakes schedule kicked off on Friday night as heavily favored Bahnah won by four lengths in the $150,000 My Trusty Cat but was disqualified and placed fifth for bumping a rival going into the far turn. That left the glory to Synapse, who finished second but was moved up to the win for the first time in her three-race career.

Bahnah entered Friday night’s main event as the only graded stakes winner in a field six after dead-heating with Brazen Persuasion in the Schuylerville Stakes (Gr. 3) at Saratoga on July 19. That fact helped make her the 1-5 wagering favorite in the My Trusty Cat and it appears she would come through under jockey Corey Lanerie.

After breaking sharply from the gate, Bahnah was taken in hand by Lanerie as she volleyed for the lead with Ima Three Blinger and Lady Grantham. Midway up the backstretch Lanerie gave her the reins and she pulled clear by about a length before Lady Grantham re-rallied and tried to hold the rail position heading into the second turn. At that point Bahnah dropping down toward the inside and made contact with Lady Grantham, causing her to check sharply and lose several lengths while the rest of the field went by attempting to catch the leader. At the finish line Bahnah was well clear of Synapse, who rallied from last.

Synapse’s journey was much less eventful as jockey Gerard Melancon took his mount to the back of the field before launching a strong rally while wide turning for home. In the stretch Synapse passed tiring rivals but was no threat to the original winner. Ima Three Blinger, a Texas-bred daughter of Too Much Bling, stayed on for third and was moved up to second, finishing ¾ of a length behind Synapse.

The final running time in the My Trusty Cat was 1:26.73 over a fast track.

The win by Synapse not only marked the first victory of her career, it also came in her first start over a dirt surface. The Andrew Leggio, Jr. trainee had only raced on turf at Louisiana Downs during her first two trips to the starting gate which including a maiden race and the Happy Ticket Stakes, where she finished a troubled fourth.

Synapse, a 2-year-old filly by Fairbanks out of the Sunshine Forever mare Sarah Lane’s Oates, was bred in Kentucky by her owner Dr. Glen C. Warren.

Delta Downs wraps up its race week on Saturday with another 11-race program that begins at 5:45 pm CST. Tomorrow’s featured race is the $200,000 Jean Lafitte Stakes, which features an automatic bid into the $1,000,000 Delta Downs Jackpot (Gr. 3) for the winner.