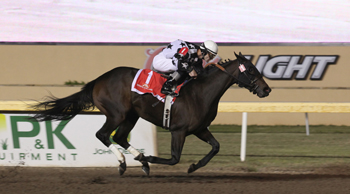 The $50,000 E.L. Gaylord Memorial Stakes at Remington Park featured a field of seven precocious 2-year-old fillies with six of them coming off victories in their most recent effort. Honey’s Ryan emerged as the only one in the group to claim another win, she dominated her peers over 6-1/2 furlongs, winning by an easy six lengths.

Owned by the large Shawnee, Okla. partnership of Rusty Taylor, Elaine Holliday, Margaret Davis, Jerry Davis and Mike Walker, Honey’s Ryan had the lead by the time the field had handled a quarter-mile and was never seriously threatened from that point. Jockey Alex Birzer had plenty of horse beneath him as he set fractional splits of :22.31 for the quarter-mile, :44.84 for the half-mile and 1:09.65 for three-quarters of a mile before a driving finish in 1:16.15 over the fast track.

Trainer Scott Young also had talented Beau Ravelle entered into the race for the same ownership group but she was scratched, leaving Honey’s Ryan to fend for herself. “It’s nice to have both Beau Ravelle and Honey’s Ryan in the barn. It’s unfortunate we couldn’t run Beau Ravelle tonight but I was pretty confident in Honey’s Ryan. She showed up and ran huge.”

Young was at ease as he watched Birzer aboard Honey’s Ryan, especially when the jockey was pulling away from the field and looking to see where his competition was. “It made me feel really good. When you look over like that, over both shoulders, I was pretty confident (Birzer) had horse.

Bakken Baby, who saw her two-race winning streak end in the Gaylord, was second to Honey’s Ryan but was no match coming out of the turn. A winner of her last race by 12-1/2 lengths, Bakken Baby could only watch the winner pull clear while she finished one-length better than third place Forever Since.

Bred in Kentucky by the University of Kentucky, Honey’s Ryan is by Student Council from the Orientate mare Run Carrie Run. She was purchased for the budget price of $1,500 in the October 2012 Fasig-Tipton Kentucky sale. Honey’s Ryan has now won two of her three starts, all at Remington Park. The Gaylord Memorial was worth $30,000 to Honey’s Ryan who pushes her total earnings to $49,680.

The Gaylord Memorial is named in honor of the former publisher of The Oklahoman who was a longtime supporter of Remington Park and pari-mutuel racing in Oklahoma when the business started in the 1980s.