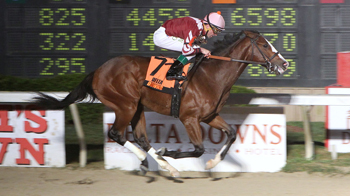 Under veteran jockey Gerard Melancon, Rise Up broke sharply before settling into second position behind early pacesetter Burning Warrior in the one-mile test for 2-year-olds. Burning Warrior opened up a four-length lead racing up the backstretch while at the same time carving out fast fractions of 22.31 seconds for the opening quarter mile and 45.50 for the half.

When the second turn arrived Burning Warrior was spent and threw in the towel, allowing Rise Up to go by with ease before the latter opened a clear lead in the homestretch. At the finish line Rise up was 6-1/2 lengths clear of Mighty Brown who rallied for second while Flat Gone grabbed the show position, another 7-1/4 lengths up the track.

Rise Up covered the eight furlongs over a fast track in 1:38.20. It was the second fastest Jean Lafitte clocking behind Rule, who won the 2009 edition in 1:37.45. Rule, a Todd Pletcher trainee, would eventually win the $1,000,000 Delta Downs Jackpot a few weeks later.

In addition to his victory with Rise Up, Melancon also won the $150,000 My Trusty Cat Stakes at Delta Downs on Friday night aboard Synapse. The My Trusty Cat is the local prep race for the $500,000 Delta Downs Princess (G3), also contested on Jackpot Day.

The win by Rise Up, who is conditioned by Thomas Amoss, marked the third of his career from five starts. It was also his second stakes score after taking the $100,000 Mountaineer Juvenile on August 3. His effort on Saturday night placed another $120,000 into his bankroll, which now stands at $210,633.

Bred in Kentucky by Cottonwood Stables LLC, Rise Up is a regally bred 2-year-old colt by Rock Harbor, out of the Johannesburg mare Appenzell.

Delta Downs wrapped up its third week of racing on Saturday night and will race live again next Wednesday through Saturday. Post time each night is scheduled for 5:45 pm CST.