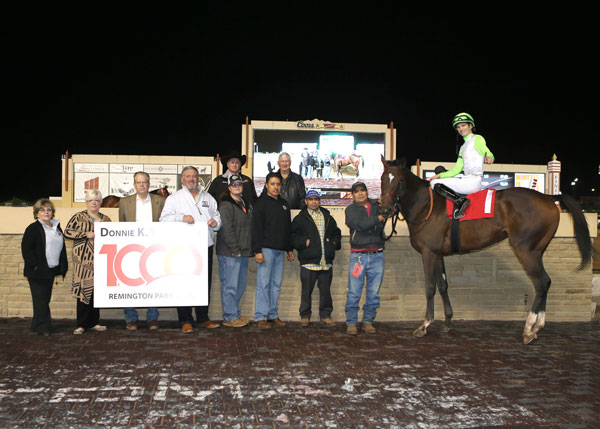 Von Hemel came into the Remington Park season with 986 local wins, needing 14 to reach the milestone. He picked up No. 999 on Friday, Oct. 7 as Strive won her third turf race of the season. Von Hemel then had to wait three more racing days to gain No. 1,000. Owned by The Elkstone Group of Greenville, Del., Sweet Posse was ridden by Jareth Loveberry.

A 2-year-old filly, Sweet Posse gained along the rail in the stretch of the one-mile event for maidens, moving inside of Sunday Night Miss in the final sixteenth of a mile. In the last few yards it looked like the Von Hemel wait would grow longer but Sweet Posse reached down to just get to the finish first in 1:40.88 over the fast main track.

Von Hemel was not in attendance at Remington Park for his 1,000th but acknowledged many via the Von Hemel Racing account on Twitter after the win. “Thanks to all of the staff at the barn, the great owners, wonderful horses, the many fine jockeys, Remington Park and the horse community in Oklahoma.”

Bred in Oklahoma by Tracy Strachan, Sweet Posse is by Caleb’s Posse from the Blushing John mare Plenty Sweet. Von Hemel also trained Caleb’s Posse, who won the Breeders’ Cup Dirt Mile in 2011, a year after winning the Clever Trevor Stakes at Remington Park when he was a 2-year-old.

In addition to Caleb’s Posse, Von Hemel’s top charges at Remington Park include Clever Trevor, Mr. Ross, Going Ballistic, Alternation, She’s All In, Peach Brew, Marq French, Suddenbreakingnews and others among a long-list of stakes winners. Von Hemel has won the Grade 3 Oklahoma Derby three times, also the most of any trainer. He won the top race in state Thoroughbred racing with Clever Trevor (1989), Queen’s Gray Bee (1991) and Going Ballistic (2007).

Von Hemel has won the Remington Park training title 12 times, more than any other trainer. A member of the Oklahoma Horse Racing Hall of Fame at Remington Park, he trains his horses primarily at Oaklawn Park in Hot Springs, Ark. and Churchill Downs in Louisville, Ky. in the calendar year prior to Remington Park’s Thoroughbred Season opening in August.