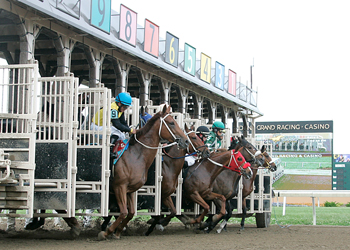 The Indiana Horse Racing Association, Inc. (IHRA) will hold its third annual Hall of Fame induction Monday, Oct. 17 at 5:30 p.m. at The Columbia Club in downtown Indianapolis. The organization will honor inductees Harold Barnes, Mari Hulman George, Senator Robert Jackman, DVM, and Don Myers (posthumously). Each inductee will be honored with a resolution as well as a portrait. Portraits of the 2016 inductees have been painted by Mr. Mark Dillman of Indianapolis and will be displayed in the clubhouse of the Indiana Grand Race Course.

The Indiana Horse Racing Association, Inc. (IHRA), an Indiana Not For Profit Corporation, was founded in 2014 for the following purposes: 1) Establishing and maintaining the Indiana Horse Racing Hall of Fame to recognize leaders in the Indiana horse racing industry; 2) Preserving the history, heritage and traditions of the sport; and 3) Educating the public about the rich and colorful history of horse racing in Indiana and its many contributions to Indiana agriculture and Indiana’s economy.

Admission into the Indiana Horse Racing Hall of Fame is determined by a vote of the Directors of IHRA. To be eligible for admission, a person must have made long lasting and substantial contributions for the benefit and advancement of the sport of horse racing in Indiana. In the first two years, the directors unanimously selected Senator Lawrence M. Borst, DVM, Mr. Michael G. Schaefer (posthumously), Senator Richard Thompson, and Mr. Ralph Wilfong (posthumously) as inductees into the Indiana Horse Racing Hall of Fame.