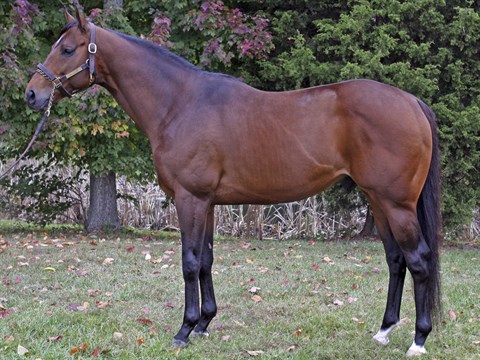 Indiana stallion Noble’s Promise was represented by his first winner on October 12 when his Indiana-bred son Reverend John won a maiden special weight contest at Indiana Grand. The Christopher Melton trained colt won by 1 ¼ lengths with jockey Rodney Prescott up for the one-mile trip in 1:40.95. Reverend John runs for Larry Rodgers and John Shelley III and was bred by Shelley and R and M Stables Inc.

Reverend John had been knocking on the door for his first win with second- and third-place finishes in six of his first seven starts, including a third at Keeneland and a second at Churchill Downs. The 2-year-old boosted his earnings to $51,600 with the win and improved his record to 8-1-2-4.

Noble’s Promise, a son of Cuvee, was one of the top 2-year-olds of 2009 with a victory in the Grade 1 Dixiana Breeders’ Futurity, a second in the Grade 1 CashCall Futurity and a third in the Grade 1 Grey Goose Breeders’ Cup Juvenile. He also won stakes at 3 and 4, including the Grade 3 Aristides Stakes, and retired with a record of 27-6-7-3 and earnings of nearly $1.2 million.