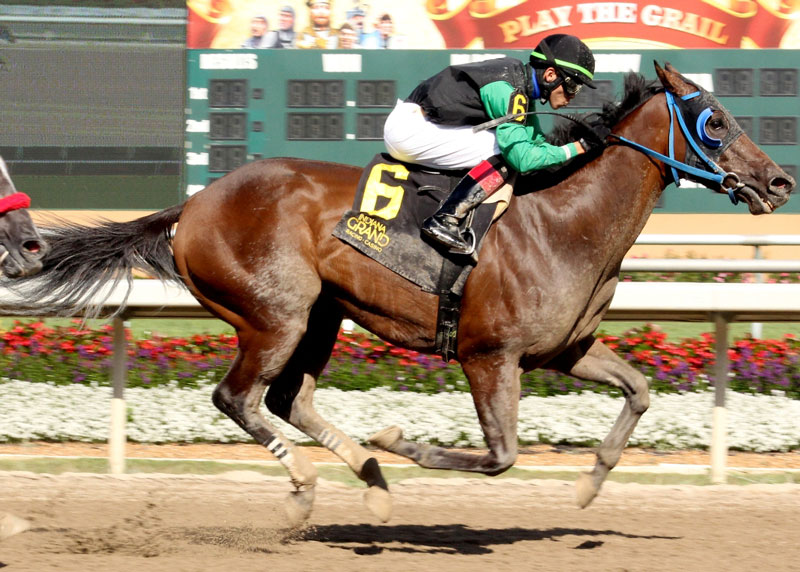 It was his first true test since his two-year-old season and he passed with flying colors. Supreme Justice and jockey Marcelino Pedroza rallied home for the victory in the $100,000 William Henry Harrison Stakes Wednesday, Aug. 23 at Indiana Grand. The win was one of five on the card for Pedroza, who is currently in third place in the 2017 standings.

Starting from post six in the nine horse lineup, Supreme Justice broke in mid pack and stayed with the biggest bunch out of the gate as Walden Forest and Malcolm Franklin accepted the challenge to lead the field. Sucess Is Racing and Eddie Perez moved up along the inside and Zoned In and Rodney Prescott moved up on the outside to retain good positioning and keep up with Walden Forest while the remainder of the pack followed along.

Movement began to happen heading into the turn of the six-furlong sprint and Supreme Justice was in the thick of the action. He was along the outside of several horses ready to pounce once they hit the stretch. Operation Stevie and Emmanuel Esquivel saved ground inside to get into the battle while Zoned In and Walden Forest held their ground near the front. Supreme Justice was on the far outside while Double Tuff and Leandro Goncalves were between horses making their bids to the wire.

In the stretch, a fierce battle began between the top five horses with Supreme Justice shaking loose in the final yards of the race to win by one length. Double Tuff shifted to the outside and made a good run at the leader to finish a closing second while Zoned In held the toughest along the inside for third.

It was the ninth win of the year for Supreme Justice, who was claimed in Tampa this spring by different connections before joining the barn of Trainer Cipriano Contreras and owners Acclaimed Racing Stable and Gumpster Stable for the start of the Indiana Grand season in April. The now five-year-old son of Lantana Mob was taking a big jump in class and was putting his five-race win streak on the line in the William Henry Harrison Stakes. However, Supreme Justice proved he is still a contender among the older male ranks in the state of Indiana.

“He (Supreme Justice) is supposed to be a nice horse,” said Contreras, referring to his past success and breeding. “He just gets better and better with every start. He was winning almost everything we put him in and it seemed like there was almost no place to go with him but into this stakes race. He seems to get a little tougher every start. We will keep him in Indiana until the meet is over.”

As a two-year-old, Supreme Justice was a major player on the Indiana racing circuit. He won the $85,000 Crown Ambassador Stakes at two and competed in stakes as a three-year-old. Since that time, he has been claimed several times before settling in the Contreras shed row.

Pedroza capped off a fantastic afternoon at Indiana Grand, winning five races on the card. The jockey from Panama won five of the eight Thoroughbred races on the card. He won the early double aboard Sung in the first race followed by a win with Vreeland in race two. He was back in the winner’s circle for race four with Cora Anne followed by his stakes win with Supreme Justice in the seventh race. His final race of the day was another win for Trainer Genaro Garcia with New Town Jazz in the eighth race. Garcia, who is leading the trainer standings in 2017, had three wins on the card with his owners, Southwest Racing Stable, also sharing in all three of those wins. Owner Bruce Murphy was part of two of the wins from the Garcia barn.