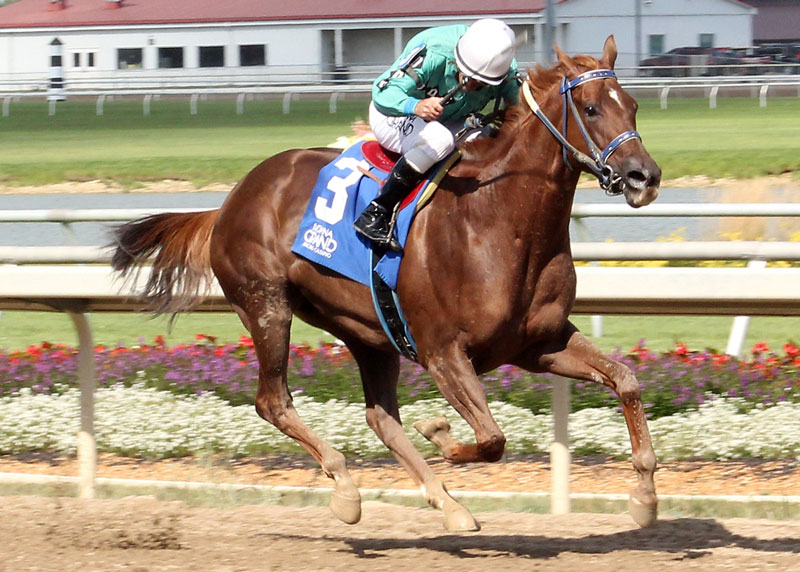 Joyous Lady and jockey Tommy Pompell had a perfect journey to retain their title and easily win the $100,000-added Shelby County Stakes at Indiana Grand Wednesday, Aug. 23. The duo covered the six-furlong sprint in a time of 1:10.65.

Starting from post two in the lineup for seven Indiana sired fillies and mares, Joyous Lady broke evenly with the pack as Carmalley Chrome and Rodney Prescott rolled out to the expected lead. Peyton’s Pass and Eddie Perez recovered from a slow start and moved up along the inside to stay right with Carmalley Chrome in the early stages of the race. Joyous Lady maintained positioning in the center of the track and although she was gapping a little on the top two, she was well in hand for Pompell.

Around the only turn of the sprint, horses from the back began to gain positioning for the stretch drive. Joyous Lady moved up to the leaders three wide with She Mabee Wild (Jon Court) and My Erin (DeShawn Parker) to her outside as the field turned for home.

Once she was able to straighten out, Joyous Lady overtook Carmalley Chrome and fluidly moved to the lead. She held her position all the way to the wire to win by one and one-half lengths. Hay Little Bit and Alex Contreras rallied up late to nip the photo away from race favorite She Mabee Wild by just a nose for second.

“She (Joyous Lady) always breaks sharp but I wanted to lay behind the speed,” said Pompell, who is currently fourth in the standings for 2017. “The other horses came up on the outside of me and I had to use her a little bit in the turn, but she kept going. It didn’t seem to affect her in the end.”

Overlooked at the windows, Joyous Lady returned $12.20, $6.60, $2.80 across the board. It was the eighth win for the five-year-old daughter of Kela, all recorded at Indiana Grand. Joyous Lady is owned by Dennis Claramunt and Randy Klopp and trained by Klopp. The partnership, along with Cynthia Claramunt bred and raised the mare, who has now earned in excess of $388,000.

“There were no races for her and we want to keep her in Indiana,” explained Klopp on the big layoff from her last start in early July. “We don’t like to go out of state, so we just waited for this stake. I thought Tommy (Pompell) did a great job riding her today. He gets along with her good and she is hard to get along with. The speed in this race was where we thought it would be, so it set up great.”

Klopp added that the connections behind Joyous Lady will wait until the next stakes race coming up at Indiana Grand for her next start, which should be the $100,000 Merrillville Stakes slated for Wednesday, Sept. 13. She finished second to Carmalley Chrome in last year’s edition of the Merrillville Stakes.