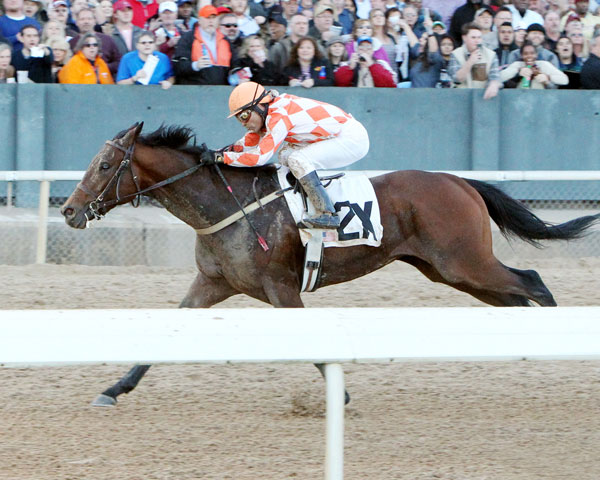 Suddenbreakingnews is scheduled to make his 4-year-old debut in Friday’s seventh race at Oaklawn, a fourth-level allowance/optional claimer for older horses at 1 1/16 miles. Among Oaklawn’s leading 3-year-olds, the gelding will be making his first start since a fifth-place finish in the $750,000 West Virginia Derby (G2) Aug. 6 at Mountaineer.

“We’re ready to go and see what we can do,” Von Hemel said before training hours Sunday morning.

Von Hemel passed Oaklawn’s first major two-turn race for older horses, the $125,000 Fifth Season Stakes Jan. 13, and entered Suddenbreakingnews in a 1 1/8-mile conditioned allowance Sunday. But the race, carded at a rare distance for an Oaklawn allowance, didn’t fill. Von Hemel said the sixteenth of a mile difference isn’t trivial for a late-running horse like Suddenbreakingnews, owned by Samuel Henderson.

“Most of the races are a mile and a sixteenth, so you have to be able to perform in both,” Von Hemel said. “Could there be a different winner, whether it’s another sixteenth? Certainly.”

Regular rider Luis Quinonez is scheduled to ride Suddenbreakingnews, a winner of 3 of 11 lifetime starts and $745,032.

“First time against older horses – that’s a hurdle,” Von Hemel said. “After time off, that’s a hurdle. You always have questions in your mind. You want to see what he’s about this year.”

Suddenbreakingnews was a last-to-first winner of the $500,000 Southwest Stakes (G3) last February at Oaklawn. He then ran fifth in $900,000 Rebel Stakes (G2) and second in the $1 million Arkansas Derby (G1) at Oaklawn and fifth in the Kentucky Derby.

Suddenbreakingnews, a son of 2003 Horse of the Year Mineshaft, was gelded shortly after the West Virginia Derby, Von Hemel said.

He has had eight published workouts since Dec. 5 at Oaklawn, the last a half-mile move in :49 Saturday morning, in preparation for his comeback. Save a handful of missed training days because of a frozen racing surface (Von Hemel said that factored into his decision to skip the 1 1/16-mile Fifth Season), Suddenbreakingnews hasn’t had any hiccups, the trainer said.

“We’ve juggled a little bit of the muddy days, but we should be ready to go,” Von Hemel said.

Von Hemel saddled Alternation to victories in the Razorback, Essex and Oaklawn Handicap in 2012.