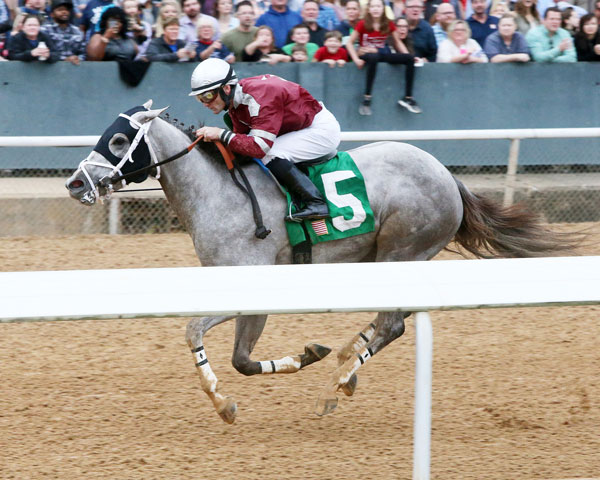 Iowa-bred Chanel’s Legacy, at odds of 5-1, came flying down the lane to win Saturday’s $125,000 Dixie Belle Stakes at Oaklawn before an on-track crowd of 10,000. It was the second Dixie Belle victory for owner Allen Poindexter and trainer Lynn Chleborad since 2013 when American Sugar won the six furlong race.

Jockey Alex Birzer kept Chanel’s Legacy within striking distance from the start and the pair followed in third as Country Candy and 3-5 favorite Vertical Oak battled through fractions of :22 and :45 3/5 for the first half mile. The winner came three wide into the turn and as soon as she hit the stretch, she shook clear of her competition to win by 2 ½ lengths. My Sweet Stella closed from last to get second, a half-length in front of third-place finisher Five Star Factor. The winning time was 1:11 4/5 for six furlongs over a fast track.

The favorite, Vertical Oak, was fourth. She was followed by I Be Jeannie B, Country Candy and No Closure.

“We talked about it this morning and we thought there would be speed,” Chleborad said. “We thought we’d be laying about third, right off of them, pressing the pace if things worked out. But, you never know until they break. I think she could have gone to the lead pretty easy, but she’s got to save her kick for the end. And, that makes her a better horse, when she comes from off the pace and then kick ’em on down the lane.”