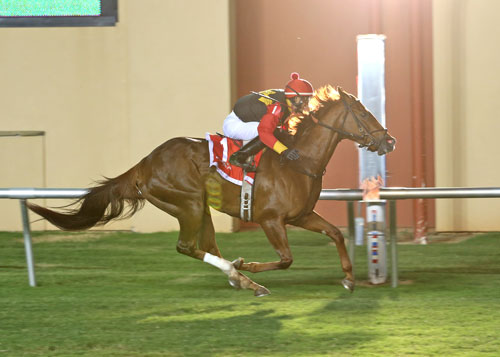 The $50,000 Remington Park Turf Sprint for Oklahoma-breds served as the first stakes race on the season schedule at the Oklahoma City track. The Friday night feature went to the speedy mare Devious Rumor who defeated nine others, all males, by an easy 2-3/4 lengths.
Owned by Doyle Williams of Tulsa, Okla. and trained by Scott Young, Devious Rumor was ridden by Belen Quinonez. The 5-year-old mare went immediately to the front from her rail post position and was never seriously threatened. She opened up in the final furlong before crossing the finish line in :56.05 seconds over the firm turf.

The front-running effort by Devious Rumor denied the veteran Okie Ride a fourth consecutive win in the Remington Park Turf Sprint. The 9-year-old gelding was making his first start of 2016, rallying up the rail for a solid second-place effort. Perfect To Please moved wide around the field in the stretch to gain third, 3-1/2 lengths behind the winner.

The victory was the ninth from 16 career starts for Devious Rumor, a daughter of Street Boss from the Siphon (Brz) mare Gracinha. She was bred in Oklahoma by Rendell Saddler. Devious Rumor made $28,000 for her score in the Remington Park Turf Sprint to run her overall bankroll to $143,553.

Remington Park was forced to cancel the ninth and final race on Friday for safety reasons. High winds and a heavy thunderstorm rolled over northeast Oklahoma City, shortly after the stakes race became official. The severe weather knocked out part of the track’s lighting system to create the issue.