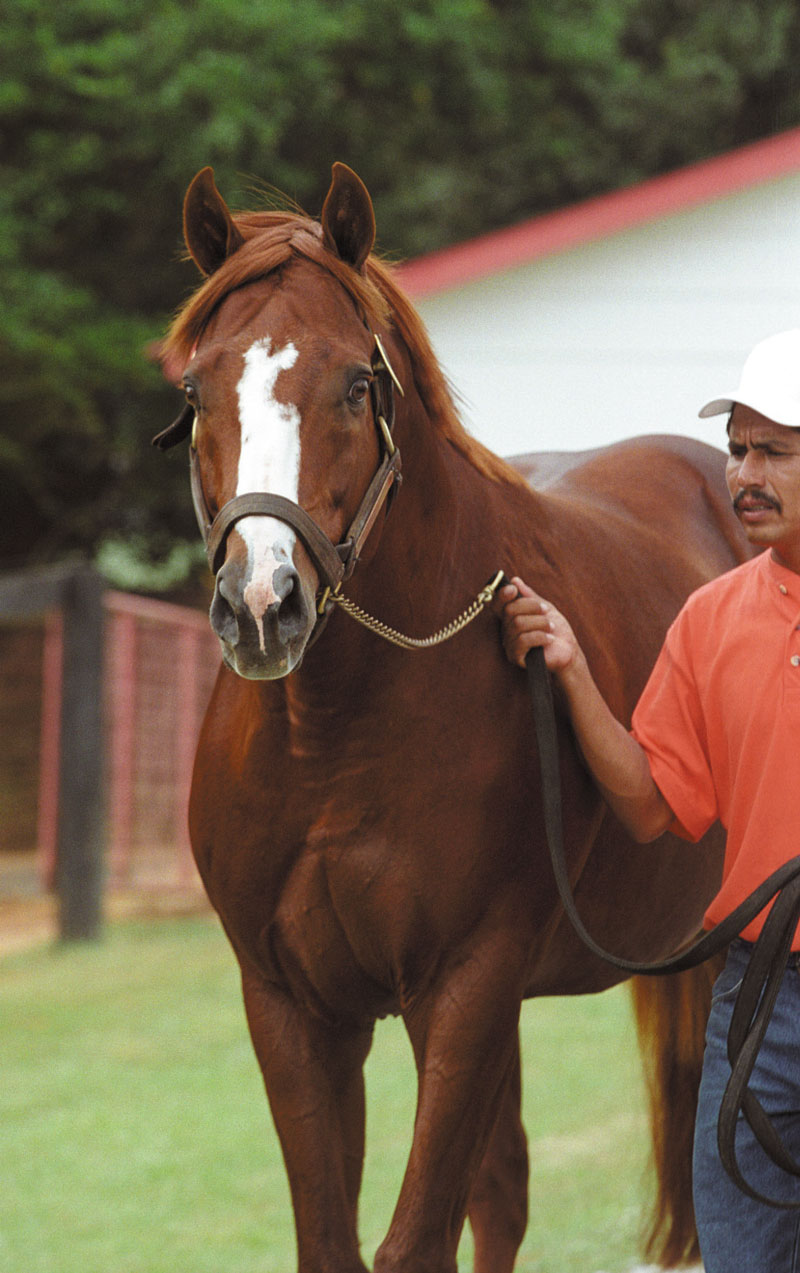 The stallion Ide, who has been a perennial leading active sire of Louisiana-breds since coming to the state for the 2003 breeding season, has been pensioned. Old Friends Thoroughbred Retirement Farms has a place reserved for the 24-year-old chestnut son of Forty Niner out of Maytide, a stakes-winning Naskra mare.

Ide was among the early favorites for the Kentucky Derby before an injury ended his career. At ages two and three, Ide won seven consecutive races including five stakes, four of which were graded. As a juvenile he was ranked among the top colts of his generation, being weighted at 121 pounds on the Experimental Free Handicap, a figure only bettered by Maria’s Mon (126), Unbridled’s Song (126) and Hennessy (124). On the board in eight of nine starts, Ide’s earnings on the track totaled $363,780.

Pete Willmott who raced Ide through his Willmott Stables and maintained a business interest in his stud career expressed his thoughts, “I can only say positive things about this horse. He was a relatively small horse with a huge heart.….his trainer called me about his injury on April 1st , and I thought it was an April Fools joke. That was a real blow. He deserved a shot at the classics….He always had a positive attitude, and that can be said of him as a stallion as well.”

Ide entered stud in 1997. After initially standing at the Lavin Family’s Longfield Farm, he moved to Louisiana and stood at Clear Creek Stud in Folsom for The Ide Group throughout the rest of his career. In addition to Willmott, the Ide Group consists of partners Bryan Harang (Georgia Farms, Inc.), Allen Peltier, and Harvey “Drew” Peltier, III.

He was the leading sire in Louisiana for 2003 by number of winners and North American earnings, and stayed at or near the top of the leading Louisiana sires list for the remainder of his career. He was the A.L. “Red” Erwin Louisiana Sire of the Year in both 2009 and 2013, leading all other sires of Louisiana-breds in earnings those years.

In a 2007 column in Thoroughbred Daily News (1-24-07) Bill Oppenheim ranked Ide #1 in his “Leaders By C Runner Index,” and stated “if I was a Louisiana breeder, Ide would sure be on my list of stallions… he’s still a more efficient sire of C Runners than the likes of A.P. Indy (third), Storm Cat (eighth), Distorted Humor (11th) and Danzig (13th)…”

Val Murrell, general manager of Clear Creek Stud, LLC where the stallion has stood since 2003 remarked, “Ide has been really great for Clear Creek and the entire Thoroughbred industry in Louisiana. He has consistently produced runners that have been highly competitive at every level. They often run early, and more importantly I think, they last. They hold together and reward owners over the long haul. He has been incredibly kind and easy to deal with and he will be missed by many. However we are very comfortable in knowing that Mr. Willmott has him accepted to go to Old Friends. He deserves it.”

Ide Group manager Harvey “Drew” Peltier, III, says “The opportunity to live out his days at Old Friends where I know he will have plenty visitors and attention, is like having a happy ending to a book or a movie. I couldn’t be happier for him.”

“We are honored the Ide Group has chosen us for their wonderful stallion,” said Michael Blowen, President and founder of Old Friends. “It’s really a privilege to care for these great athletes when their careers are over. We’re looking forward to all of Ide’s fans visiting the farm.”

Old Friends is a 501 (c) (3) non-profit organization that cares for more than 160 retired racehorses. It’s Dream Chase Farm, located in Georgetown, KY, is open to tourists daily by appointment. Old Friends also has two satellite facilities: Old Friends at Cabin Creek: The Bobby Frankel Division, in Greenfield Center, N.Y., and Old Friends at Kentucky Downs, in Franklin, KY. For more information on tours or to make a donation see their website at www.oldfriendsequine.org or contact the main farm at (502) 863-1775.