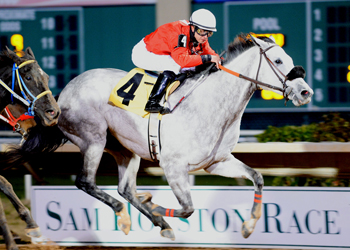 Sam Houston Race Park will kick off its 22nd racing season on Friday, January 16. Opening night will honor the men and women who serve our country with Free Admission for Military (with ID) and a salute to accreditedTexas-breds.

Last year, Judy Peek’s homebred daughter of Pulling Punches won the Yellow Rose in front-running fashion, holding off the late closers to capture her second stakes of the year. Trained by Kevin Peek, the 7-year-old mare continued her stakes-winning ways in 2014, capturing the $50,000 Wayne Hanks Memorial Stakes and the $50,00 Valor Farm at Lone Star Park as well as the $75,000 Zia Distaff on November 26. Chris Rosier, who rode her to victory in the Wayne Hanks Memorial Stakes, has the mount.

“We’ve been very fortunate with Lasting Bubbles,” said Peek. “She did not race until her 4-year-old campaign and has stayed healthy. We were very proud of her race at Zia. That was a pretty long haul and we didn’t know how she would handle it, but everything clicked. She looked like she was a 4-year-old again!”

Lasting Bubbles is the high earner in the field with $358,418 in 27 lifetime starts. She will face her stiffest test from stakes winner Platinum Song, who captured the 2013 Bara Lass. The 5-year-old daughter of My Golden Song is owned by Sharon McDaniel. Trainer Randy Mayfield trains the grey mare who will be ridden by E. T. Baird.

The Yellow Rose will run as the seventh race on the card with an approximate post time of 9:46 p.m. (CT).

Calhoun won the 2014 Bara Lass with Scooter’s Choice and hopes for good efforts from Silver City Sal and Santacafe. Both fillies broke their maiden last May at Lone Star Park with Santacafe running second to the highly regarded Vivian Da Bling in the $100,000 TTA Sale Futurity last July at Lone Star Park.

Both fillies were bred by the late Clarence Scharbauer Jr. and are owned by his son, Douglas. Calhoun has a cherished association with the famed Texas owner and breeder, and is grateful that Douglas will continue the legacy.

“I owe so much to Clarence and Valor Farm and credit them for producing so many fine Texas-breds,” said Calhoun. “Thankfully, Douglas has taken the reins in the business and has jumped in with both feet.”

Santacafe will be ridden by Chris Rosier and Lindey Wade will pilot Silver City Sal.

Pish will saddle Silver Akantha, a Silver City filly bred and owned by John Silverthorne Ranch Inc. She has won two of her three starts and will be ridden by Gerardo Mora, leading rider at Sam Houston for the past two years. Roman Chapa will guide Infectious, a daughter of Valid Expectations, who broke her maiden on November 15 at Remington Park. She is a Will S. Farish homebred.

“I have always had some nice Texas Champions wins,” acknowledges Pish.  “Some of my horses have stepped up and run their best races in these stakes.”

The six furlong Bara Lass drew eight fillies and will run as the eighth race on the card.

Trainer Larry Stroope will saddle the 6-year-old daughter of My Golden Song, who has now won six of her 14 turf career races.

2013 champion, Vilao, owned by Rugged Cross Racing, will attempt to turn the tables on Smiles Golden Song. Trainer Rebecca Baker reports that Vilao is in good form for her return to the Connally Turf course on Friday evening. She drew post position nine and will have regular rider, Ramon Luna aboard.

“This is the best I’ve ever seen this mare come into a race,” said Baker. “She has settled in nicely in Houston.”

Baker, who has six horses in training, had trouble getting the right races for her 6-year-old mare in 2014. Vilao made her last start at Mountaineer in September, running second in a turf allowance.

“I just couldn’t get the right races to go for her last year,” said Baker. “I ran her twice on dirt in Ohio and she ran second, which was great as turf is really her preferred surface.”

Baker is one of many conditioners who give high marks to the Sam Houston turf course.

“We love the turf surface in Houston,” added Baker.  “Her outside draw is what we wanted, so I am hoping for good things in the San Jacinto.”

The field of 12 includes Green Briar Kitty, who closed for second in the 2014 San Jacinto, at odds of 52-1. David Cabrera will ride the 6-year-old mare for owner Danny Burnett.

Ideal Opening Night Weather Forecast
Friday is expected to be a clear, sunny day in Houston with an afternoon high of 60 degrees and a low of 45 forecast for the evening. No rain is expected for the end of the week so track conditions should be fast and firm on the Connally Turf course. Cool, clear weather will continue on Saturday evening as well.

Solid Jockey Colony at Sam Houston Race Park
There will be no shortage of talent in the Sam Houston Race Park jockey colony throughout the 2015 Thoroughbred meet.  Gerardo Mora, who has won the title for the past two years, will be joined by respected veterans Deshawn Parker and Roman Chapa, 2011 Sam Houston leading rider Lindey Wade and David Cabrera, who won riding titles at both Lone Star Park and Retama Park in 2014.

“I am really ready for the meet to begin and very happy to be riding three stakes on opening night,” said Cabrera.  “I really like all my mounts!”

Cabrera, who began 2014 as an apprentice, and made a seamless transition throughout the year, does not take his success for granted.  He knows he will have to bring his best to compete with his fellow riders in Houston.

“This is definitely a tough group of riders,” admits Cabrera.  “In this business, you can never take anything for granted. I try to learn something every day and with each race I ride.”

Trainer Danny Pish gives high marks to the jockeys who will ride this meet at Sam Houston Race Park. He will tap the talents of Mora, Chapa, Parker Cabrera and Dakota Wood this season.

“There is a lot of depth in the Sam Houston jockey colony this year,” said Pish. “I am pleased that I can count on any number of accomplished riders.”