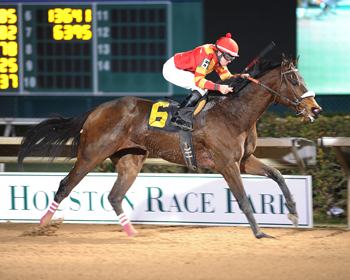 Following his victory in the Star of Texas, Milligan entered Texas Air in the $100,000 Maxxam Gold Cup and he ran a solid third to Red Rifle and runner-up, Frac Daddy. Texas Air will be making his 35th career start and has bankrolled $174,099 to date.

“He really likes it at Sam Houston,” said Jeannette Milligan. “He’s been training well at Oaklawn and Allen and I will van him to Houston on Thursday morning.”

Defiant Flyer is another contender and will break from the far outside post under Constantino Roman. The gelded son of Early Flyer was the upset winner of the 2012 Jim’s Orbit Stakes, but has been doing the majority of his running at Hawthorne and Arlington Park. Liane Davis trains for Double D Stables, Inc and Steve Lewis.

Trainer Danny Pish has entered Ring Necked, a son of current leading Texas sire, Too Much Bling. The 4-year-old is bred and owned by the partnership of W. S. Farish, Hugh Fitzsimmons and E. J. Hudson. Ring Necked will be ridden by Roman Chapa.

Post time for Saturday night is 6:00 p.m. (CT) will the Star of Texas carded as race six, the first of the four Texas Champions stakes.

Gold Element, owned by Danny Keene, will be ridden by David Cabrera. The son of Gold Legend is a notable “horse for the course” with a record at Sam Houston of four wins from six starts.

Wagson, owned by Texas Bucket List Racing LLC, ran third in the 2014 Spirit of Texas.  The 6-year-old was claimed by Karl Broberg, and prepped for this stakes with a six furlong victory last month at Fair Grounds.

Calhoun’s entrants are Douglas Scharbauers’s Alamo City with Deshawn Parker in the irons and Silverhill with Colby Hernandez up. Supermason, owned by Brad Grady, completes the Calhoun trio.

In an interesting post position scenario, the three are entered side-by-side and will break from the far outside posts in the nine-horse field.

“I just hope they don’t run into each other,” quipped Calhoun.

He does acknowledge that each of his young horses have potential, crediting Silverhill as a “very consistent” performer and Alamo City as a runner who might “need a little more ground”, but could be there with the right pace set up.  Both are sons of Silver City bred by the late Clarence Scharbaurer Jr. at Valor Farm.

Supermason, a son of Grasshopper, made his last start in the $250,000 Springboard Mile at Remington Park. Lindey Wade has the return call.

“He has been one of these ‘in and out’ horses,” said Calhoun. “Lately, he’s given me inclination that the lights are coming on and he might be ready to run a big race.”

Last year, Quiet Acceleration, under jockey Roman Chapa, slipped through an opening inside the sixteenth pole to take the Richard King. Bred, owned and trained by Danny Pish, the 6-year-old has solid turf credentials and has topped the $200,000 earnings mark.  Chapa will guide the dark bay gelding, who will make his 34th career start.

“With his style of running, he can make it work from any post position,” stated Pish of the Texas-bred son of Silent Picture.

The defending champion’s toughest rival looks to be Magna Breeze, who captured the Texas Racing Hall of Fame Stakes at Retama Park, and is in pursuit of his fourth consecutive win.  The 5-year-old son of Magna Graduate is trained by Mike Maker for owner William Buck Butler. Ernesto Valdez-Jiminez, who was aboard for the Hall of Fame victory on October 18, will ride.

Fly the Red Eye and Seeking West, who placed second and fourth, respectively, in the Texas Racing Hall of Fame Stakes, are two of the other contenders in the ten-horse field.

Excitement Building for the $400,000 Houston Ladies Classic
Sam Houston Race Park officials are looking forward to an outstanding night of racing on Saturday, January 24. The $400,000 Houston Ladies Classic, the richest Thoroughbred race in Texas will anchor an exceptional card, which will also include three additional stakes: the Grade 3, $200,000 Connally Turf Cup, the $75,000 Frontier Utility Turf Sprint, and the $50,000 Allen’s Landing Stakes. The marquee racing event will be broadcast on HRTV, “The Network for Horse Sports”.

Advance wagering for the January 24 card will be offered on Friday, January 23 and Sam Houston will donate $1 for each patron to benefit the Houston affiliate of the Susan G. Komen®.