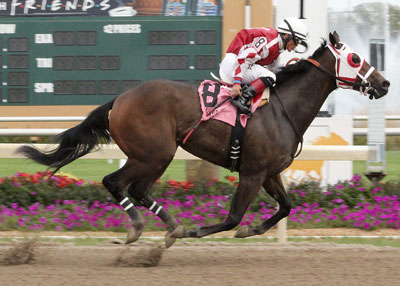 Ron and Indiana Grand Leading Jockey Fernando De La Cruz rolled to an easy victory in the 18th running of the Crown Ambassador Stakes at Indiana Grand Wednesday, Oct. 5. The duo covered the six-furlong event in a time of 1:11.06 to win by four and one-half lengths. The race was the first of four stakes on the program that featured purses in excess of $500,000.

Owned and trained by Marvin Johnson, the heavily-favored Ron began his journey from the outside post eight in the stakes named for former Indiana stallion Crown Ambassador that stood at stud at Swifty Farms. The two-year-old son of Mondavi shot out from the gate with authority but had to handle inside challengers early. De La Cruz found a resting spot on the heels of Sung and Malcolm Franklin, who was joined by Running Strait and Albin Jimenez to his outside down the backstretch.

In the turn, Ron joined the top two and became a challenge for the final half of the race. The freshman gelding had taken over a short lead at the top of the stretch and created a tough scenario for any of the late runners to catch up to him. The battle became for second between Sung and Running Strait, with Sung getting the slight advantage at the wire while late closer Calandave and Dick Cardenas just missed snagging the third spot from Running Strait.

“He (Ron) is fun to ride,” said De La Cruz. “He’s an easy horse to ride too. We got good positioning today right on the outside and I was able to put him right there in a stalking position. I asked him at the half pole and he just kept going.”

Ron paid $2.60, $2.10, $2.10 across the board. The win in the Crown Ambassador was his first stakes victory and his second overall in five starts. The Indiana-bred doubled his career earnings and now possesses more than $100,000 in purse earnings for Johnson.

“I bought him (Ron) and his mother (Colton’s Dilemma) off the breeder (Carol Renn) when he was just a baby,” said Johnson. “He was a good looking individual. I’ve always liked him from the very start and always thought he was pretty special the whole time I’ve had him.”

With a name like Ron, one has to wonder how the name emerged from a stable that includes a large number. Johnson, who has bred and raised horses all his life, used a unique form to come up with the name for his latest standout.

“I’ve named so many horses over the years, you run out of ideas,” said Johnson. “So, I picked up the phone book and the first name I saw was Ron. That’s how he got his name.”