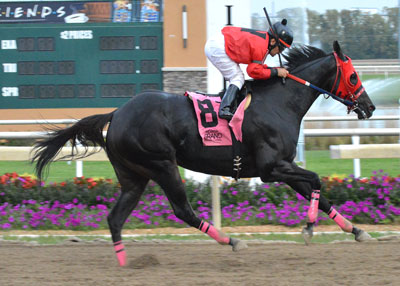 There was no reason to doubt the ability of Sucess Is Racing in the 16th running of the $100,000-added Gus Grissom Stakes Wednesday, Oct. 5. The six-year-old racehorse was favored and didn’t disappoint, turning in a three-length victory, his second stakes win of 2016.

Under the guidance of jockey Eddie Perez, Sucess Is Racing left the starting gate from post seven. He had speed on both sides of him in the 10-horse lineup, but the race went as planned. Derby Express to his inside grabbed the top spot early, giving Sucess Is Racing the opportunity to sit right behind him through the early part of the one and one-sixteenth mile race.

The race went unchanged until the final turn arrived. Derby Express began to experience some pressure from the rest of the pack and at the top of the stretch, Sucess Is Racing took control of the lead. The Major Success gelding moved on out away from his challengers and had a nice easy rhythm down for the final strides of the race, winning in a time of 1:43.51. Derby Express was a comfortable second over Still Chief and Marcelino Pedroza, who moved up on the outside late to claim third place honors.

Sucess Is Racing paid $3.40, $2.40 and $2.10 across the board. The win was his ninth overall in 34 career starts for Trainer Kim Hammond. Charles Watt and David Neiman’s Willowbrook Stables, LTD have now accumulated more than $500,000 in earnings with their standout Indiana-bred gelding.

Perez was making his third start aboard Sucess Is Racing. He also connected earlier in the summer with the gelding in the $100,000 William Henry Harrison Stakes and finished second in his last start to Bucchero in the $100,000 Brickyard Stakes.

“I was very confident in what this horse could do in this race,” said Perez, who has switched his tack to Indiana Grand this summer after a long stint on the Chicago racing circuit. “He was a little fractious in the gate, but he left pretty fast. The race set up was just what I expected. I wanted to get him right behind the speed and save him for the stretch.”

The win moved Perez into the top 10 in the leading jockey standings for 2016. The win also moved Hammond into a tie for a spot among the top five trainers at the track. It was her 27th win of the meet and horses from her barn have accumulated nearly $750,000 in purse earnings this season.