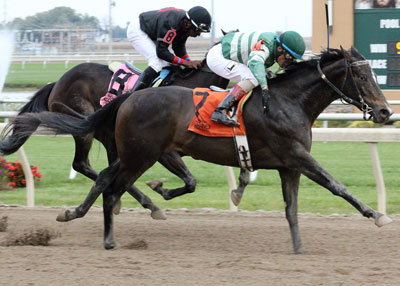 I Came To Praise, with jockey David Flores aboard, made her Indiana debut an impressive one, winning the 19th running of the $100,000-added Indiana Stallion Stakes – Filly Division Wednesday, Oct. 5 at Indiana Grand. The Indiana-bred filly shipped in from the West Coast for the race for Owner Bruce Dillenbeck, who purchased her last fall from the yearling sales in Lexington, Ky.

I Came To Praise appeared to have a tough task ahead of her. Several of the freshman fillies in the Indiana Stallion Stakes have already won races at Indiana Grand, but their experience did not deter the Star Cat filly. Starting from post six in the eight-horse lineup, I Came to Praise had a slightly slow start but quickly made up for it in the latter part of the six-furlong race. Flores got the filly into position down the backstretch and timed his move toward the leaders just right, moving with authority around the turn as race favorite Defining Hope and Malcolm Franklin held their position on the lead.

At the top of the stretch, it had become a two-horse race. Both fillies were game for the stretch drive, but in the end, I Came To Praise had too much momentum, fending off Defining Hope to win the race by three-quarters of a length in a time of 1:11.45. Challenge Accepted and Albin Jimenez rounded out the trifecta.

“She (I Came to Praise) broke well and I didn’t really know what to expect,” said Flores. “I let her drop back a little because she didn’t want to be pressured. I’m really happy with the way she raced. She really picked up toward the end. I was happy I saved her during the first part of the race.”

“Bruce (Dillenbeck) came out to Indiana Grand a year ago for a visit and I actually met him then,” said Swingley. “He had planned on getting stalls here this year but got hung up in Phoenix. He decided to send this filly out and I’ve had her for 10 days. She will stay here until the end of the meet for the next stakes race coming up ($100,000 Miss Indiana Stakes Oct. 29).”

I Came To Praise is still learning the ropes of racing. She was fairly animated in the paddock and loading into the starting gate. She was led into the gate without Flores, who climbed aboard once she was settled.

“She (I Came To Praise) is a little bit of a stinker,” said Swingley. “She kicked me in the hand when I was saddling her in the paddock. But, we will school her out of it the best we can. I believe she will run on down the racetrack and her connections think she will be better at two turns, and I think so too. She had to run five furlongs in all of her starts in California, so this is a better fit for her. She was on remote control today. I think she has a nice future.”

Dillenbeck may also have a nice future in the State of Indiana. He is considering a move to the Hoosier State and relocating his stable to become more involved in the Indiana program.