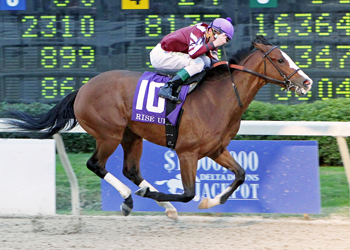 Trainer Tom Amoss and veteran jockey Gerard Melancon teamed up for four wins Saturday at Delta Downs punctuated by Rise Up capturing the $1,000,000 Delta Downs Jackpot (G3) for 2-year-olds with a dominating six-length victory over Casiguapo and 10 points on the Road to the 2014 Kentucky Derby standings.

Rise Up, owned by Paul and Adrena Van Doren, won his fourth race in six starts this year, which included a six-length victory in his most recent start, the Jean Laffite Stakes at Delta Downs. A bay son of Rockport Harbor, Rise Up completed the 1 1/16 mile race in 1:44.71 over a fast track and earned a $600,000 paycheck for his owners. The clocking established a new stakes record as it eclipsed the time of 2008 winner Big Drama, who covered the distance in 1:44.72. It was also the second Delta Downs Jackpot victory in the last three years for Melancon, who won the race on Sabercat in 2011.

Sent off as the 2-1 second choice in the 10 horse field, Rise Up ($6.20) broke well from the outside post position and Melancon guided his mount to the front past Mighty Brown at the quarter pole and secured his position down the backstretch holding a half-length lead through three quarters of a mile in 1:11.94.

“Down the backside Gerard gave him breather and that’s where the race was won,” said Amoss, who trained his first Jackpot winner, and saddled My Lute to a third place finish in this year’s Preakness Stakes (G1).

From there Melancon let loose on Rise Up, increasing their advantage to three lengths in the stretch.

“I’ve been guilty so many times of taking horses with so much tactical speed and making them something they’re not,” Amoss admitted. “Maybe I almost did that today, but Gerard took it out of my hands and let him use his speed correctly and got us the win today. So he gets the gold star.”

“He broke really sharp,” said Melancon. “My plan was to stall and not get a whole lot of dirt in his face. He got a little rank the first 1/16 or first 1/8 of a mile and I had a couple horses inside of me. I was like, ‘well I don’t want to get hung up in a speed duel with these.’ He came back to me and set his ears straight up and I was like, ‘this is where I want you.’ Around the turn, I said from here if they beat us, they’re going to have to outrun us.”

Casiguapo, 6.5-1, second in the Hopeful Stakes (G1) at Saratoga this summer, passed Mighty Brown in deep stretch to wind up second, a 1 ¾ lengths ahead of Rankhasprivileges. They were followed in order by Roman Unbridled, Whyruawesome, Mighty Brown, Big Bazinga, Coastline, Flat Gone and Rum Point. Coastline, the 8-5 favorite, stumbled at the start, then raced three wide down the backstretch but faltered turning for home and wound up eighth.

The 10 points earned by Rise Up moved him into a four-way tie for third place in the Road to the Derby Point standings used to determine starting positions in the 2014 Run for the Roses in case more than 20 starters are entered in the Derby. Rise Up is four points behind Havana (14) and Bondholder (11). Second place finisher Casiguapo picked up four Derby points, Rankhasprivileges, two points, and Roman Unbridled, one point.

“As the race went through my mind this morning, I felt that some very good horses have competed in this race, said Amoss, who won his first $1 million race as a trainer. “My Lute (trained by Amoss) ran second and the Louisiana Derby and third in the Preakness. I thought this was a very good field and I’m excited to be in this kind of company. Hard to believe it’s still Grade 3 status.”

Three horses from the 2012 Delta Downs, Goldencents, My Lute and Itsmyluckyday all qualified for this year’s Kentucky Derby. Goldencents scored two Grade one victories, taking this year’s Santa Anita Derby and the Breeders’ Cup Dirt Mile.

In other stakes action on the program, Robert Masterson’s Tepin scored a 1 ¼ length victory over Bahnah to win the $500,000 Delta Downs Princess (G3) for 2-year-old fillies. Tepin, the 3.5-1 third choice in the seven-horse field, trained by Mark Casse and ridden by Miguel Mena, covered the one mile in 1:38.95. In the $75,000 Sam’s Town Stakes for 3-year-olds at 7 furlongs, Hip Four Sixtynine ($19.60) came off the pace and powered to a 3 3/4 length upset victory for trainer Joseph Foster and jockey Robby Albarado.