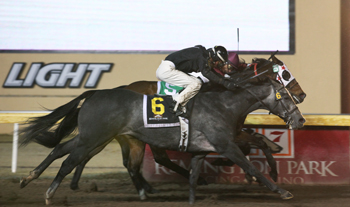 The top Oklahoma-breds currently in Thoroughbred racing met at the wire in Friday night’s $50,000 Silver Goblin Stakes at 6 1/2 furlongs. It was a race for the ages and a race with two winners as Okie Ride and Z Rockstar finished on even terms.

After breaking alertly at the rail and zipping directly to the lead, Fifth Date, a 9-year-old gelding with more than a half-million dollars in earnings, led a hotly contested pace. He turned a quarter-mile in :22.34 and a half-mile in :45.16 over the fast track.

As the field turned for home, Okie Ride, the defending winner of the Silver Goblin, surged to challenge for the lead. Under Luis Quinonez, Okie Ride had pressed Fifth Date for the better part of the race to the stretch. Z Rockstar was only a length off the leaders in the lane and responded willingly under jockey Cliff Berry in the drive for the wire. The trio edged clear of the challengers and there were three bobbing heads at the wire which resulted in a dead-heat for the win between Okie Ride and Z Rockstar. The winning time for the race was 1:17.20.

Okie Ride, a 6-year-old gelded son of Candy Ride (Arg) from the Geiger Counter mare Tic Tic, is a homebred of John and Kris Richter of the Richter Family Trust of Perkins, Okla. He is trained by Kenny Nolen.

Z Rockstar, a homebred of Dr. Robert Zoellner of Tulsa, Okla. is trained by Donnie K. Von Hemel. A 4-year-old gelding by Rockport Harbor from the Nasty And Bold mare Nasty Little Star, Z Rockstar was third in last month’s Oklahoma Classics Cup at 1-1/16 miles before shortening up to the Silver Goblin sprint distance.

The Silver Goblin is named in honor of the speedy gray Oklahoma-bred who was dominant at Remington Park and beyond in the mid-1990s, going on to earn more than a million-dollars in his career.

The 25th Anniversary Season of Thoroughbred racing at Remington Park continues Saturday evening with a nine-race program, underway at 7pm.