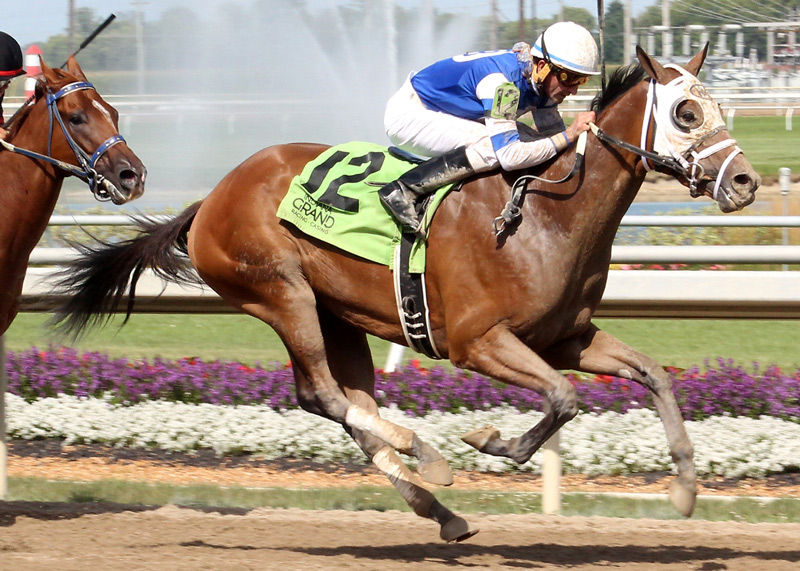 Retrospection has not been worse than second all year and proved that he cannot be overlooked as he paired up with Jockey Robby Albarado to take home the top prize in the 14th running of the $150,000 Governor’s Stakes Wednesday, Aug. 9. They covered the one mile and 70-yard event in a time of 1:42.66 to record their second win in five starts for 2017.

Starting from the outside post 11, Retrospection had intentions of getting up close to the pace early on, but a lot of traffic forced Albarado wide in the first turn as Shezaguy and Eddie Perez scooted up the inside to take advantage of the top spot early on. Evader and Marcelino Pedroza, also a longshot in the field, also made their presence known early, sitting to the outside of Shezaguy through the early portions of the race. Retrospection never let the top two get out away from them too far and maintained their position down the backstretch.

Heading into the final turn, Wing And Wheel and jockey Fernando De La Cruz also moved in for the challenge and by the time the field had hit the top of the stretch, a new leader had emerged. Wing And Wheel first passed Evader and then had to deal with Retrospection, who dug in gamely for the stretch drive. Persistence paid off for Retrospection as he got the advantage late in the race to win by two lengths at the wire over Wing And Wheel. Plainfield and Manny Cruz rallied up impressively from last after a bumpy start to finish third.

Retrospection, the favorite of the race, paid $5.60, $3.60, $2.40 across the board. The three-year-old son of Daaher moved his career earnings up past the $200,000 mark with his win in the Governor’s Stakes, his second stakes win this year at Indiana Grand.

“We had a better trip the first time out (in the Hoosier Breeders Sophomore Stakes) and last time out, the front one (Mind Reader) got in front and got away from us and we couldn’t catch him (in the Snack Stakes),” said Albarado, who has more than 5,000 career wins. “Today, I wanted to sit as close and I could. We made the lead a littler earlier than I wanted to, but he’s a nice little horse and raced gamely today.”

Owned by Beth Burkett, Retrospection was making his fifth start of 2017. He has made all seven career starts at Indiana Grand. The Indiana bred was raised by breeder Randy Burkett, who was trackside with several family members for the trophy presentation in the Governor’s Stake.

“He won his first stakes race here and we got lucky again today with another one,” said Randy. “We plan to stay here with him (Retrospection). We have a couple more stakes planned for him later this year.”