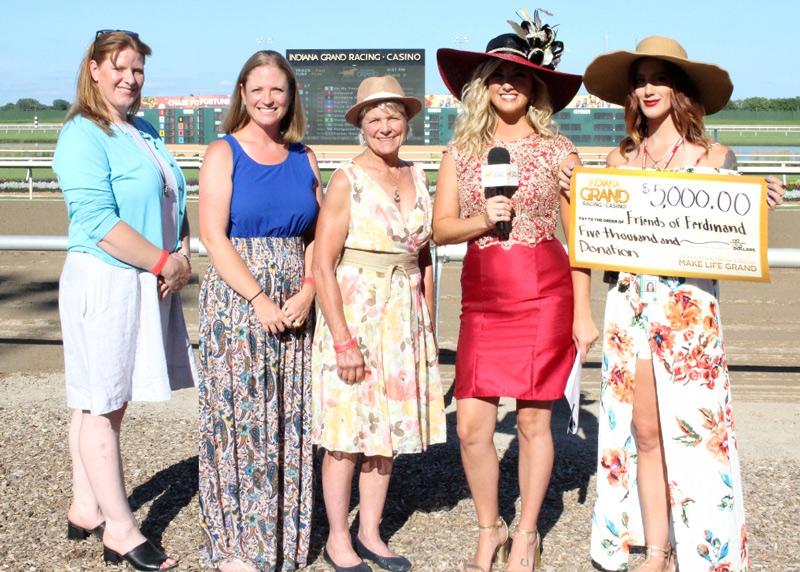 A record crowd and generous donations made the 23rd running of the Grade 3, $500,000 Indiana Derby at Indiana Grand Racing & Casino a success for local and regional charities. The Shelbyville property hosted three days of Indiana Derby festivities, culminating with the Indiana Derby on Saturday, July 15. Many organizations, including several veteran assistance programs, benefited from fundraising efforts during A Royal Derby celebration.

Five veteran organizations received donations from the annual A Knight In Arms event held on Thursday, July 13. The benefit took place in the Indiana Grand Race Course Clubhouse, and proceeds went toward Helping Hands for Freedom, K9 for Veterans, Warrior Vodka – Cheers to Our Heroes, Wreaths Across America, and Wish for Our Heroes. Total donations gained through a silent auction, Give $10 Get $10 slot promotion, and Indiana Derby Mega Bets totaled $18,935.

“It always amazes me to see the continued generosity and commitment to our veterans shown by Indiana Grand Racing & Casino and Centaur Gaming. Our COO, Jim Brown, continues to take giving to the next level and this year was no exception. During A Knight In Arms gala, he increased the amount each charity received to bet on the Indiana Derby from $1,000 to $2,000,” said Marine Corps Veteran Glendel Coble, Indiana Grand Racing & Casino’s vice president of casino non-gaming operations.

Coble added, “The live races were named to honor each charity, and two of our fallen heroes. As a veteran, the respect that was shown to all of our veterans and the Gold Star families was truly amazing.”

Also benefiting from fund-raising efforts was Friends of Ferdinand, a local Thoroughbred Aftercare Alliance Foundation (TAA) accredited racehorse adoption program that retrains and cares for horses no longer suitable for racing. The Friends of Ferdinand program was the recipient of a $5,000 donation from Indiana Grand Racing & Casino.

In addition, Indiana Grand made a $3,000 donation to Catch the Stars Foundation, an organization created by Olympic Gold Medalist and WNBA All-Star Tamika Catchings. Catchings made an appearance at the Indiana Derby to promote her Catch the Stars, which empowers youth to achieve their dreams by providing goal setting programs that promote fitness, literacy, and youth development throughout Indianapolis, with a specific emphasis on supporting and assisting under-served and low to moderate income communities throughout our city.

Christine DeBaun from Shelbyville High School stated, “We made $600 and most of that was made in about a three-hour period. We had a great time and are very grateful for the opportunity. We would also like to extend a very big thank you to Indiana Grand’s food and beverage director, Erik Meierant, and the F&B crew for knocking it out of the park during the entire experience. They went above and beyond.”

“We sold out of everything. We had to go buy more sugar for cotton candy. Our total over two days was $560,” said Cindy Leahy, Morristown High School Chorale Director.

Indiana Grand Racing & Casino was also a big winner with record derby attendance and high revenues throughout the three-day affair.

“This was a record-breaking Indiana Derby,” said Jonathan Schuster, vice president and general manager of racing at Indiana Grand. “Last year, we surpassed the old record wagering handle by about $400,000, which was $3.15 million versus $2.71 million. This year, our handle surpassed last year’s record number, $3.58 million versus $3.15 million in 2016. Attendance for the event was 13,622 this year versus12,974 last year.”

Schuster also noted that the results were not only record setting, but were also trend-bucking when compared to the national average.

“This year’s Indiana Derby was an impressive collaboration to provide a great experience for our guests and our racing fans across the nation. It was a thing of beauty to watch unfold,” noted Schuster. “I could not be prouder to work with such a marvelous team.”