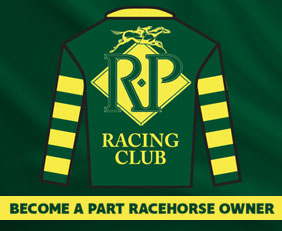 Remington Park is now accepting memberships for the 2018 RP Racing Club. This year’s club horse will compete during the upcoming Thoroughbred Season that begins Aug. 24.

The RP Racing Club offers a racehorse ownership experience for an extremely reasonable, one-time fee. The cost of a single membership into the 2018 RP Racing Club is $250. Memberships can be purchased online now at remingtonpark.com, simply click on the RP Racing Club logo to get started.

The inaugural RP Racing Club in 2017 enjoyed thrilling competition as their horse, Pinnacle Peak, competed in numerous races. Through his efforts, 2017 RP Racing Club members did receive $215 back on their original membership investment, in addition to receptions on race nights and barn visits to meet their horse in person.

Once again for 2018, the RP Racing Club horse will be obtained and managed by Danny Caldwell, a nine-time leading owner during the Thoroughbred Season at Remington Park. Active in acquiring horses via claiming races and private purchases, Caldwell has already reached the winner’s circle 70 times in 2018 with his horses earning more than $1.3 million. Caldwell, from Poteau, Okla., has competed primarily at Oaklawn Park, Will Rogers Downs, Prairie Meadows and Canterbury Park during the first seven months of the year. He is set to spend the final third of the year in his home state at Remington Park.

The 2018 RP Club horse will be trained by Federico Villafranco, the primary trainer for Caldwell’s horses.

Members of the RP Racing Club will receive owners’ access to Remington Park, including: visiting the track in the mornings to watch your horse during training hours; experience pre-race moments in the saddling paddock with trainer and jockey; and hopefully enjoy the thrill of victory, getting to stand in the winner’s circle for a photograph with your triumphant horse!

RP Racing Club members will also be invited to special events, including a reception on days when the Club horse competes.

The RP Racing Club has no hidden expenses. All members will receive detailed monthly statements regarding costs for the horse, and depicting money earned from racing. Club Members will receive regular updates about their horse and club events via email and social media platforms from club coordinator Kelly O’Hara.