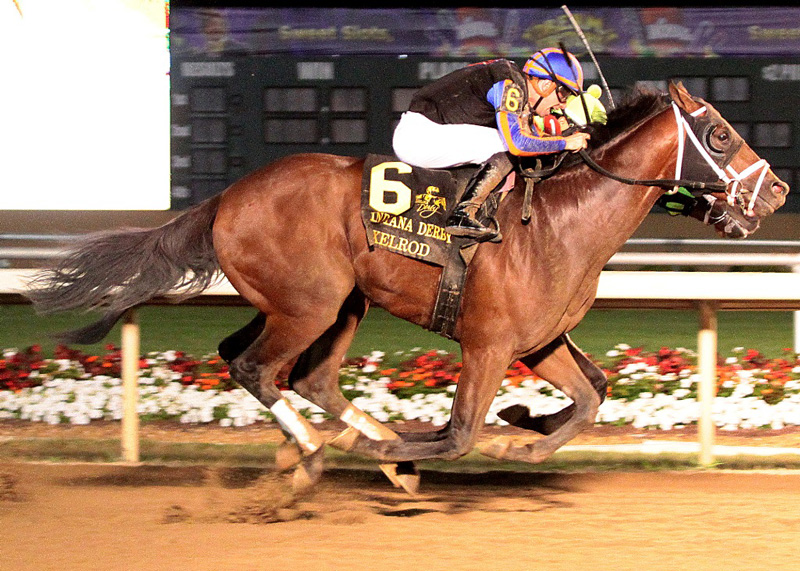 If a race was predicted at the start, Axelrod would not have been a strong contender for the win in the 24th running of the Grade 3, $500,000 Indiana Derby. However, it is how you finish that matters and Axelrod was full of momentum when he hit the wire, nabbing Trigger Warning for the win.

Starting from post six, Axelrod and Florent Geroux broke slowly from the gate and was nowhere near the front runners of the nine horse field as Trigger Warning and Irwin Rosendo shot out to an early lead along the inside, tracked closely by Blame the Rider and Julien Leparoux just to their outside. Givemeaminit and Marcelino Pedroza sat third and Dark Vader with Corey Nakatani also showed early speed to sit in fourth just outside of Givemeaminit. Geroux chose to slip Axelrod over to the rail to save ground around the first turn and trail the field. Trigger Warning continued to set the brisk tempo and was showing no signs of letting up through the half, making it clear the field would have to fight him for the lead.

Around the turn, horses from the back of the pack began to make their move, including Axelrod who had chosen an outside path to move with horses toward the lead. At the head of the stretch, Trigger Warning had opened up by two lengths on the field and was not slowing down. Midway through the stretch, Geroux kept encouraging Axelrod for more speed and the three-year-old responded, surging toward the leader and getting the win in the very last step of the race by the margin of a head at the finish line in 1:43.00. Trigger Warning was a solid second over Title Ready and Ricardo Santana Jr., who also moved up late in the race to finish third over race favorite King Zachary and Robby Albarado.

“There was a lot of speed in the race and it’s just how the race unfolded,” said Geroux on his slow start with Axelrod. “I didn’t feel like being between horses. That’s just how it is sometimes. When I began to move him in the turn, his heart started getting bigger and bigger. I just felt confident right about the three-eighths pole. Before then, not so much. That was close at the end. I mean I’m not sure (about catching Trigger Warning). But the last two jumps, my horse just kept running on.”

Trigger Warning ran a huge race and his connections were very proud of his performance.

“He ran hard, nice colt,” said trainer Mike Rone. “He does what we ask of him. Yeah. I was very proud.”

Jockey Irwin Rosendo was working hard to keep Trigger Warning on the lead. He thought he could hold off Axelrod, but said, “Gosh, caught the last jump.”

For race favorite King Zachary, Albarado, a three-time Indiana Derby winner, is still very impressive by his horse despite the fourth place finish.

“He broke good and I shoved on him to get him some position there,” said Albarado. “It seemed like it was conducive to speed all day. I didn’t think they went overly quick, but I caught myself kind of chasing a little bit up the backside just trying to keep him in the race. He felt great physically. By all means, I didn’t lose any confidence. I do believe he’s a top horse. I’m going to stick with that and hope they continue on the plan to go after the big fish with him, because he’s a big horse. I think when you see him go a mile and an eighth, a mile and a quarter, you’ll see him start to spread himself out a little bit.”

Axelrod, a $25,000 yearling purchase in the Ocala Breeders Mixed Sale in 2016, earned his first win of 2018 in the Indiana Derby and his first Graded Stakes victory. The Warrior’s Reward colt is owned by Nick Cosato’s Slam Dunk Racing and trained by Michael McCarty. It was the first start outside of Axelrod’s home base of Southern California. He flew into Kentucky earlier this week and shipped up by van the morning of the Indiana Derby under the care of Natalie Roberts for McCarty.

“We felt confident about him (Axelrod) going into the race,” said Roberts. “He is a very classy, laid back and easy going horse. We knew he was a closer and with a lot of speed in the race, we thought he would race well. As far as I know, he will be shipping back to California pretty soon unless the owners and trainer decide something else.”

Axelrod, the sixth pick in the race according to odds at the beginning of the race, paid $26.80, $9.80 and $6.60 across the board. It was his third career win and he catapulted his career earnings to more than $370,000 with his win in the Indiana Derby.

For Geroux, it was the perfect way to cap off a very successful evening. He scored four wins in the first nine races, three of which were stakes races. He also connected for the win in the $100,000 Michael G. Schaefer Memorial with Pioneer Spirit and Dot Matrix in the $100,000 Warrior Veterans Stakes.

“It was my first time riding for Michael (McCarthy),” said Geroux. “I’ve known him for a long time, being an assistant for Todd Pletcher. But since he’s so far away from where I’ve been riding, we never got the chance. You know, (seemed like) a speed-favoring track, and everybody sent. I said, ‘You know what? Let’s just go to the fence and hope to get lucky.’ And I’m glad I did because it worked out well. Everybody went fast, and I was able to pick them off right at the end. On paper it looked like he’s a front-runner or a horse to be close. But last time the pace was very slow in the Affirmed. I mean, 48 (seconds for the half-mile) in California is pretty much crawling on the dirt, and we could see everybody had a very tight hold. So that’s why Michael told me today, ‘Don’t be surprised if he’s farther back, or if you need to work on him. It seems like he was pretty close last time, but the pace was pretty slow.”

McCarthy stayed home in California because his seven-year-old daughter, Stella, was in a swim meet. He missed watching her last week to be in New York, so he chose to send the horse to the Midwest under the care of Roberts.

“Believe me, if it wasn’t for her, I would have been there,” said McCarthy. “But I felt this was something I needed to do. It’s one of those things that I don’t get to see her swim much, and I missed seeing her last week when we were in New York for the American Oaks and the Suburban.”

This is McCarthy’s second-biggest purse to win, behind the $750,000 Oaklawn Handicap, though he is a multiple Grade 1 winning trainer.

“I thought he broke sharp,” said McCarthy, who watched on television. “It looked like there was plenty of pace up in front of him. I saw the opening quarter in 23 and 2. Florent seemed to be fairly content with his position. Turning up the backside, he was able to save some ground. Coming to the three-eighths pole, it didn’t look like anyone was really running away from him. He was able to maintain his position. Obviously when Florent wheeled him outside around the turn and switched leads and kind of started picking off horses at the quarter pole, I thought he was liable to go ahead and get a check. And then coming to the eighth pole, it looked to me like he was able to find that extra gear and get his nose down at the wire, and I couldn’t be happier. I’m very happy for the horse, very happy for my whole team and very thankful that Florent rode him with some confidence, and that made all the difference for us.”

McCarthy admits Axelrod has been a late bloomer in his stable.

“He’s by Warrior’s Reward,” noted McCarthy. “It’s a late-developing family, and this horse is just getting better all the time. We gave him a little bit of a break over the winter. It seemed to do him some good, and everything he’s done since then has just been great. For $500,000 I thought it was a great spot. My owner was very bullish about sending him as well, so I’m very happy about that. When everybody is on board and these things come together and work out, it gives you a lot of satisfaction.”

McCarthy is already looking ahead to the next stop for Axelrod.

“I’m not sure about the spacing to the West Virginia Derby,” said McCarthy. “Maybe a race like the Travers. We’ll let him dictate where we go next. There is no real standout 3-year-old race here at Del Mar. So most likely he will get on the road somewhere. We can also take a look at the Secretariat later on this summer. He’s a very hard-trying horse. Seems to run well on any surface. Look, he’s certainly proven on the dirt, he’s got three wins on dirt. But his turf races are actually very respectably as well.”

Racing fans across the nation wagered $3,628,578 on the 10-race card at Indiana Grand, which is a new track record. The previous handle record was established during the 2017 Indiana Derby with $3,581,501 wagered.