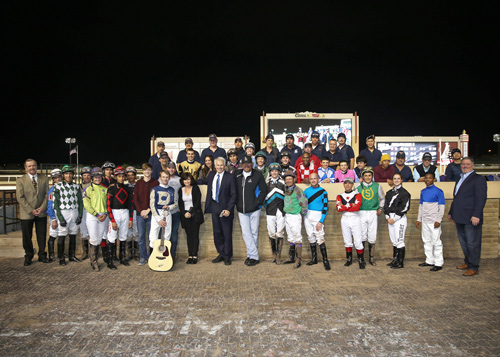 The final evening program of the Remington Park Thoroughbred Season on Saturday doubled as Cliff Berry Appreciation Night. The retiring jockey was honored with a series of presentations throughout the race card, less than 24 hours before he plans to wrap up his career in the saddle in Sunday’s Springboard Mile.

Berry only had three mounts on Saturday and failed to win a race, mustering one second-place finish and another in third. He will begin his final race day on Sunday at Remington Park with 2,125 career wins in Oklahoma City and 4,457 overall.

Berry has ridden first-call for trainer Bret Calhoun for well over a decade at Remington Park, Oaklawn Park and Lone Star Park. Calhoun was in attendance Saturday night and after race four, presented Berry, an avid golfer, with a $1,000 gift certificate for a custom set of golf clubs.

The second presentation came after race six as Kelly Cathey, executive director of the Oklahoma Horse Racing Commission, honored Cliff with a bronze horse trophy for his 30 years of racing in the state. Matt Vance, Remington Park’s vice president of operations followed with a framed photographic depiction of the three Oklahoma Derby victories by Berry. He won the richest Thoroughbred race at Remington Park three times: 2003 with Comic Truth; 2006 with Mr. Pursuit and this year with Shotgun Kowboy.

The final presentation took place after the seventh race. Joined by his wife, Kim, and his two sons Baylin and Cale, the entire jockey colony at Remington Park, track management and the starting gate crew in the winner’s circle, a feature video depicting the highlights of Berry’s Remington Park career was shown.

After the video Berry mentioned he will miss winning races and the camaraderie of the racetrack community. “Every morning I enjoy seeing everyone, the grooms, the hot walkers, gallop boys, every one of them.”

While wearing the silks of Toby Keith’s Dream Walkin Farms during the final presentation, Berry was asked what it was like to ride horses over the years that were bred and owned by the country music superstar. A musician himself, Berry mentioned his appreciation to ride for that operation and “wished I could sing and play guitar like him.”

At that point Toby Keith, a huge supporter of racing at Remington Park, emerged from the crowd and gave Berry one of his acoustic guitars, bearing his autograph. “Congratulations on being the winningest jockey in Remington Park history,” Keith said. “Second of all, as you ride off into the sunset, I need a backup guitar player and I’d be honored if you’d come join our band.”

Berry was temporarily caught off guard by the moment but quickly recovered to tell Keith that might not be the best idea.

Named to ride five mounts on the final day of the season on Sunday, Berry’s final Remington Park race will be in the $250,000 Springboard Mile when he handles Better Than Magic for Calhoun.