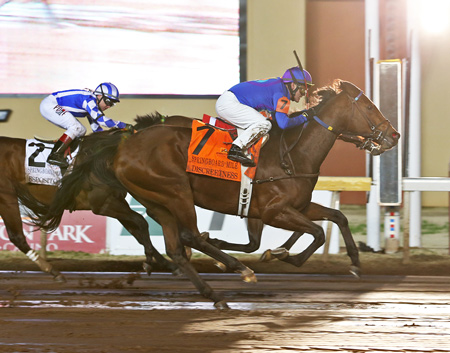 Owned by Xpress Thoroughbreds of Texarkana, Ark. and trained by William “Jenks” Fires, Discreetness was directed to victory by jockey Jon Court. The pace in the Springboard Mile came back to the pack for one of the rare times on the afternoon when dueling front-runners Giant Trick and then Blue Wings gave way, setting it up for others to rally.

Seventh along the backstretch, Discreetness stayed clear of traffic, well off the rail. Court asked his colt to move as the field moved through the final turn and he responded with a five-wide move, joining a group of four at the top of the stretch to battle for the win.

“It was quite exciting at the end, a little too tight for comfort,” Court noted. “I think this horse has really come a long way. He’s still really learning how to run. He put it together tonight and showed what he’s capable of doing. I had to hold (Suddenbreakingnews) off and had to switch sticks back and forth, just enough to keep that nod in front.”

The Springboard Mile is intended to help vault 2-year-olds into a positive 3-year-old campaign and dreams of Triple Crown competition. That is exactly the plan for Discreetness according to Fires.

“We plan to go to the Smarty Jones (at Oaklawn Park) and from there hopefully right on through. We hope to get to the Kentucky Derby but we’ll walk one step at a time.”

Bred in Kentucky by Trackside Farm & Tenlane Farm, Discreetness is a colt by Discreet Cat from the Elusive Quality mare Fondness. The Springboard Mile is the third career win for Discreetness from five attempts. He broke his maiden in his career debut at Arlington Park in August before finishing sixth there in the Arlington-Washington Futurity. He won in a conditioned allowance race at Churchill Downs in September before running fourth in the Street Sense Stakes there in November.

The Springboard paycheck of $150,000 boosts the total earnings of Discreetness to $192,122. This is the first Springboard Mile win for all the connections.

My Master Plans Remains Perfect in Trapeze Stakes
My Master Plan finished her perfect first season of racing, going to the track four times and winning four times. She capped her undefeated 2-year-old campaign by taking the $100,000 Trapeze Stakes for fillies on Sunday at Remington Park.

Owned by Joyce and Dan McGough of Granbury, Texas and trained by Donnie Von Hemel, My Master Plan attempted her first race around two turns and at more than 6-1/2 furlongs in the one-mile Trapeze. Under jockey Luis Quinonez she quickly went to the front in the field of nine and never looked back but did have to hold on late to keep a screaming charge by Dorodansa at bay in order to score by a head.

My Master Plan measured her energy in the opening quarter-mile, traveling in :24.00 seconds before picking things up at the half-mile in :47.31. She handled six furlongs in 1:12.11 before crossing the finish in 1:38.98 over the sloppy track.

“She’s a nice filly and does everything right,” Quinonez said. “She was very relaxed around the turn and was able to put them away.”

In her previous three races, My Master Plan had not led completely from the start but was usually not too far from the lead. Her tactical speed gave her connections options in running strategy.

“We thought she might be there (on the front),” Von Hemel said. “She was a little late switching to her right lead (in the stretch). She had just enough to hold off (Dorodansa) in a head-bob at the end. We were fortunate.”

A daughter of Oratory, who stands in Oklahoma at River Oaks Farms, from the Vice Regent mare One O Seven, My Master Plan was bred in Texas by Dan McGough.

The 4-year-old gray daughter of Tapit, out of the Giant’s Causeway mare, Justenufftime, has now won 7 of 12 lifetime starts. Her race winnings of $60,000 for owner Fox Hill Farms, Inc. of Lexington, Ky. has pushed her lifetime earnings to $665,233. She covered the one mile & 70 yard distance in 1:42.96 over a main track rated sloppy.

Winning jockey Ramon Vazquez put her on the lead from the start and controlled the pace throughout. “I sent her to the lead. She’s a nice filly, loves to go to the lead and fight with the other horses,” said Vazquez.

Winning trainer Larry Jones gave much credit for the win to the jockey, “Ramon just sat so well. I knew his chilly hands would probably suit this filly really well and he did great.”

Her previous start was a disappointing fifth versus allowance company at Keeneland in October. “We waited all summer trying to get her back and healthy and going again. After the Keeneland race it looked like ‘Oh geez, I hope she needed it.’ Apparently she did, she’s back,” said Jones.

Cassatt was the second-choice in the wagering at 8-5 odds and paid $5.60 to win, $3.80 to place and $2.20 to show. She held off the serious challenge of Ribbon Of Darkness, who closed up the rail to lose by a neck and pay $5.80 to place and $3 to show. Savings Account, the beaten even-money favorite, stalked and made a tepid bid to finish third and pay $2.40 to show.

Cassatt was bred in Kentucky by Mt. Brilliant Farm.

The win for Vazquez was one of his three wins on the day, which enabled him to finish in a tie for the leading jockey title with C.J. McMahon. Both riders finished the season with 87 wins.

Vazquez won the Remington Park leading jockey title in both 2013 and 2014. This was the first year that McMahon rode at Remington Park.

A pair of Oklahoma-bred 3-year-old races helped fill the undercard on Springboard Mile Day at Remington Park. The $50,000 Jim Thorpe Stakes for colts and geldings went to Delancy while Bella Paella won the $50,000 Useeit Stakes for the fillies.

Jim Thorpe Stakes
Delancy went straight to the front in the $50,000 Jim Thorpe Stakes in the opening race of the day at Remington Park and made the move last, coming home a winner by a nose over a closing Air Assault.

Owned by T and M Precision Services of Claremore, Okla. and trained by Andy Gladd, Delancy was ridden with confidence by jockey Ramon Vazquez. Air Assault moved wide into the stretch after running in mid-pack for much of the one-mile event, making a bid for the lead but Delancy repelled the challenge to the finish in 1:39.53 over a sloppy track.

Okey Dokey Kyle dueled early with Delancy but had no answer in the stretch, fading to third as the beaten 3-2 wagering favorite.

The win is the fourth overall from 17 career starts for Delancy and his third this season at Remington Park. A 3-year-old gelding by Primary Suspect from the Saint Ballado mare Spirited Maiden, Delancy was bred in Oklahoma by Center Hills Farm. The winner’s check of $30,000 moved the career total for Delancy to $82,529.

Useeit Stakes
Bella Paella ran up to expectations by taking the $50,000 Useeit Stakes as the 2-1 betting favorite, edging clear in the stretch under jockey David Cabrera to win by 2-1/4 lengths. The race is restricted to 3-year-old Oklahoma-bred fillies.

The 3-year-old daughter of Bellamy Road, out of the Awesome Again mare, Smooth Brandy, was bred by Center Hills Farm & Fred & Susan Davis, and trained by Clinton Stuart. She won $30,000 for her owner Jose Luis Espinoza of Sequin, Texas.

Bella Paella covered the one-mile race over the sloppy main track in a time of 1:40.14.

The win in the Useeit was the third from 10 career starts for Bella Paella who has now made $74,775 overall.