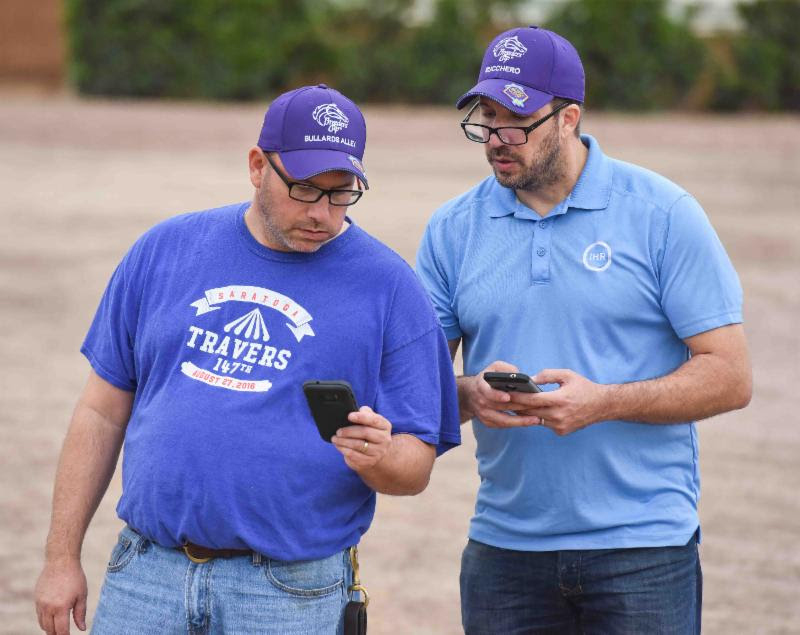 Louisville-based trainer Tim Glyshaw knows his horses are up against it when he saddles his first starters in the Breeders’ Cup Saturday: Bucchero in the $1 million Turf Sprint and Bullards Alley in the $4 million Turf at Del Mar.

With 20 years in horse racing, Glyshaw knows his chosen sport is a numbers game: the largest stables with the biggest bankrolls fill most of the starting gate for races such as the Triple Crown and Breeders’ Cup.

But Glyshaw also knows that the foundation of the sport is eternal optimism, bolstered by the legendary exploits of bargain-basement horses such as Seattle Slew, John Henry and Stymie. And Bucchero and Bullards Alley already have bucked their odds.

Bucchero, a standout when competing against his fellow horses that were born in Indiana, gave Glyshaw the biggest victory of his career in capturing Keeneland’s Grade 2 Woodford Stakes at odds of 26-1 on Oct. 7. Eight days later, Bullards Alley, coming out of a sixth-place finish in Kentucky Downs’ Grade 3 Calumet Farm Kentucky Turf Cup, gave Glyshaw a new biggest victory by dominating Woodbine’s Grade 1 Pattison Canadian International at 42-1 — his 10 3/4-length margin a record for the race in which Secretariat made his career finale in 1973.

“It was just an amazing experience,” Glyshaw said. “We thought they’d both run well. We never expected Bucchero to win fairly easy, like he did by a length and three-quarters under wraps. And what Bullard did up there, he’s never done in his life. Hopefully that’s not a one-time deal. But if it is, he sure chose the perfect race.”

Glyshaw again will be up against stables that can choose from 100, 200 or even 300 horses. Owner Harlan Malter paid $43,000 for Bucchero for his Ironhorse Racing Stable partnership, while Wayne Spalding got Bullards Alley for $11,000 at Eugene Melnyk’s dispersal sale, selling part-interest into his long-time friend Faron McCubbins, both from Mt. Washington, Ky., just outside of Louisville.

“They’re definitely workman-like horses that not a lot of money was paid for them,” Glyshaw said. “These are not horses that people paid $300,000, $400,000 to get. Those are the horses that usually win those races at Keeneland.

“It gives people who pay smaller prices for horses hope. The only thing you’ve got to watch out for is that people don’t start to expect that when you buy a horse for $11,000 or $43,000 that they’ll wind up being a Breeders’ Cup horse. But that’s always a possibility. We’ve shown that with these two horses.”

Glyshaw grew up in Evansville, graduating from Harrison High and Indiana University. He became enamored with horse racing watching the dramatic Triple Crown and Breeders’ Cup showdowns between Sunday Silence and Easy Goer, with Glyshaw becoming a regular at Ellis Park while home from colleges in the summer.

After teaching 2 1/2 years, Glyshaw gave in to the lure of the track. After serving as an assistant to well-known trainers Cole Norman and Bob Holthus, he opened his own stable in 2004 with four cheap horses that he and wife Natalie claimed for themselves.

Glyshaw carries about 25 or 27 horses, with divisions based at Churchill Downs and Indiana Grand, while wintering at the Fair Grounds in New Orleans. His horses have earned purses that surpassed $1 million each of the past six years. But in this era where the so-called “mega-stables” dominate, Glyshaw is considered a medium-sized stable, one of the blue-collar guys filling race cards across America while the big boys grab most of the spotlight.

“I didn’t grow up around horses,” Glyshaw said. “I didn’t have a network of daddy and grandpa working in this industry and I got 30 horses given to me when I decided I wanted to start training. That’s a lot of what goes on over here. I’m not badmouthing those people; a lot of those guys are very good trainers. But I didn’t come up like that. So it’s very, very pleasing to know we’ve gotten to this level with these horses.”

At Del Mar, Glyshaw serves as groom for both horses, with assistance from Doug Morley, Bucchero’s exercise rider the past two seasons who also is getting on Bullards Alley with the gelding’s regular exercise rider, Jose Quevedo, needed at Churchill Downs.

Bullards Alley and Bucchero victories Saturday would be upsets, but they’re clearly getting some respect, given that the field sizes and quality of horses drive up odds in all Breeders’ Cup races. Bucchero is 12-1 in the Turf Sprint, the same odds as Grade 3 Kentucky Downs Turf Sprint winner and Woodford runner-up Hogy, with Lady Aurelia the 5-2 favorite. Bullards Alley is 15-1 in the Turf, with British-based Ulysses 7-2, Arlington Million winner Beach Patrol 4-1 and 2016 winner Highland Reel 5-1.

“Bullard doesn’t know who he’s running against,” Glyshaw said. “He goes out and tries every time, and so does Bucchero.”

“It was a hard decision, but it might never happen again for us,” Spalding said of running in the Breeders’ Cup. “It’s a once in a life-time thing, so we had to do it.”

Malter, after flying several times a year to Indiana to watch Bucchero run, now gets to watch his stable star compete a short drive from the owner’s Orange County home.

Malter had come to know Ocala, Fla., horsemen Karen and Greg Dodd, who bred Buccharo and suggested their friend should buy him. The Dodds had Buccharo’s mom before and sold the broodmare at auction. Much later, the mare was one of about 30 found starving in a field. The animal welfare group that rescued the mares contacted Karen, who before even knowing the details — which included that the mare might not survive — said, “I’ll take her. Where do I come get her?”

Nurtured back to health by Karen, Meetmeontime ultimately foaled Bucchero, who was offered at a 2-year-old sale in Ocala three years ago.

“Greg said, ‘Look, I’ve had this horse his whole life, he’s trained fantastic. He came up with just a little spot (physical blemish) that the vets picked up at the 2-year-old sale.’ I think that’s the way the game is now, when that happens, the horse falls off the radar. Greg’s word to me was all I needed. Obviously he’s exceeded anything we’ve expected.

“I look at Bucchero sometimes and think he got his mom’s grit.”

Bucchero is a son of the Steve Asmussen-trained Kantharos, whose 3-for-3 record included Churchill Downs’ Bashford Manor and the Saratoga Special. Now at Lexington’s Hill ’n’ Dale Farms, Kantharos was standing in Florida when Bucchero was conceived, with Meetmeontime sent to foal in Indiana to take advantage of its state-bred program.

Because the Dodds liked Bucchero so much as a youngster, Malter sought out a good name. He says he’d never heard of Kantharos, but Googled the word and learned it is a type of ancient Greek pottery.

“I found out that a bucchero is a vase of that lineage of pottery,” he said.

Malter liked Bucchero so much that he purchased his half-sister and yearling full sister.

“Our motto is ‘Horse partnerships for the other 99 percent. No sheikhs or billionaires apply,’” he said. “The game has so stratified between extremely expensive horses with a limited amount of trainers and then everybody else. Look, not saying the people involved in our horses don’t make a nice living. But we’re not in position to buy $250,000 yearlings. By putting some people together and doing the right thing with the money, hopefully we can get some horses that are competitive.

“To me, there are a lot of good horse people out there. I’ll give all the credit to Karen and Greg Dodd. I think a lot of things knock out horses from being more expensive nowadays — a little issue here on an X-ray or a little bit there and maybe they get thrown by the wayside and not put through the same regimen of trying to be a top-level (sales) horse. I do feel like the way we’ve campaigned Bucchero — he had an injury after his 2-year-old year, and we gave him the time he needed — you can maybe develop these horses.”