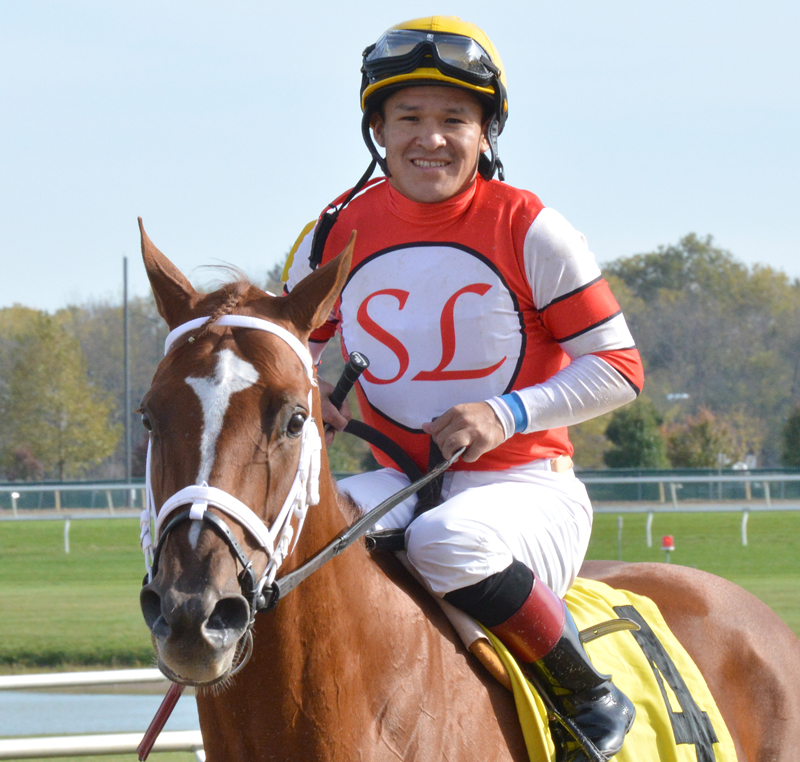 When horses enter the starting gate at Del Mar Saturday, Nov. 4 for the Grade 1, $1 million Breeders’ Cup Turf Sprint, the journey will mark a lifetime of work to reach that level for one jockey. Fernando De La Cruz, two-time leading jockey at Indiana Grand Racing & Casino, will be making his Breeders’ Cup debut aboard Indiana-bred Bucchero, starting from post 11 at odds of 12-1. The event is slated as Race 5 on the 12-race program with an estimated post time of 3:37 PM EDT.

De La Cruz is flying out of Indianapolis International Airport Thursday, Nov. 2 to meet up with the team behind Bucchero. Bucchero and his stablemate, Bullard’s Alley, flew to Del Mar Friday, Oct. 27 and they have been getting acclimated to the racetrack since that time. Trainer Tim Glyshaw also arrived in Southern California Friday. He and Doug Morley, Bucchero’s exercise rider for the past three years who also serves as a valet at Indiana Grand, have been caring for the pair of horses as they prepare for the Breeders Cup.

“This is my first Breeders Cup and I’m a little excited,” said De La Cruz. “It’s also my first time to California. I send thanks to God and the owners of Bucchero and Tim Glyshaw for including me in this race.”

De La Cruz has ridden Bucchero five times over the past two years, undefeated and all five starts, which have been stakes wins. They are currently on a three-race win streak heading into the Breeders Cup.

Bucchero and De La Cruz teamed up for a win at Mountaineer Park in early August in the $75,000 Senator Robert C. Byrd Memorial Stakes followed by a win in the $100,000 Brickyard Stakes at Indiana Grand. But they really caught the attention of North America following their win in the Grade II $200,000 Woodford Stakes at Keeneland in early October, a performance that encouraged a shot to compete in the Breeders’ Cup Turf Sprint.

“He (Bucchero) is a fast horse and he is a nice, easy horse to ride,” said De La Cruz. “The last five times I’ve ridden him, we have won all five. I get along with him great. There is nothing complicated about riding him. Tim (Glyshaw) really does a good job with that horse and really takes care of him. I haven’t been on him since our win at Keeneland, but I generally don’t get on until race time.”

That is one aspect that Glyshaw is keeping the same. He is ensuring that the routine for both Bullard’s Alley and Bucchero doesn’t drift from their regular schedule. Therefore, Morley will handle all of the exercise duties leading up to the race Saturday. And, despite the success De La Cruz has had aboard Bucchero, he was still surprised when he got the call to ride him in the Breeders’ Cup.

“It was a big surprise for me to get the call to ride him in the Breeders’ Cup,” said De La Cruz. “The owner (Harlan Malter of Ironhorse Racing) called my agent (Don Cespedes) and said ‘do you know you are going to the Breeders Cup?’ It is like a dream to get to ride in this race.”

De La Cruz is taking some reinforcements with him when he boards the plane to California on Thursday. His wife, Rosa Ore, and their two children will be on the plane as well.

“Rosa and my kids are going with me,” added De La Cruz. “My kids don’t know they are going yet. I wanted to surprise them. I really don’t know what to expect and I’m not sure what is planned once we arrive, but if we have time, I would like to take them to Disneyland.”

De La Cruz first came onto the Indiana racing scene from his native Peru in 2007. Since that time, he has maintained a position among the track’s top 10 riders each year and earned his first Indiana title in at Hoosier Park in 2012. From there, he came to Indiana Grand and has been leading jockey twice in the last four years, winning the title in 2014 and again in 2016. His 2017 return was delayed as he recuperated from should surgery sustained in a riding incident at Tampa Bay Downs prior to the start of the season in April.

“It was really hard for me after the injury,” said De La Cruz. “I’ve been riding for 12 or 13 years and to stay home was hard. It was too much pressure waiting to come back. I had the surgery in Tampa and the doctor there did a really good job. My labrum was torn in three places and my shoulder was dislocated. I had three months of rehab and it is 100 percent now.”

Indiana Grand’s second all-time leading jockey in wins resumed riding three months into the meet in mid July and won 80 races I three and one-half months to finish fourth in the standings. De La Cruz plans to expand his riding duties to close out the 2017 racing season.

“We will see what happens, but I plan to try New York (Belmont) after the Breeders’ Cup,” said De La Cruz. “I’ve always wanted to try it and I want to take a chance. Then, the plan is to return to Tampa and then back to Indiana Grand next spring.”