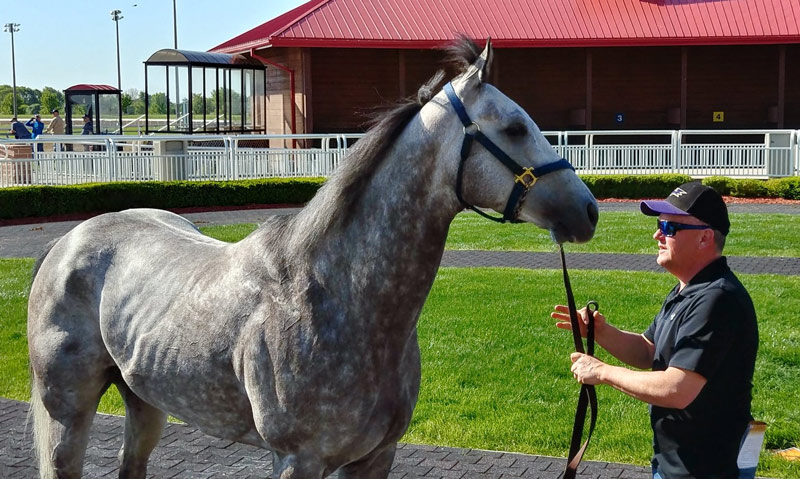 Since trainer Kelly Von Hemel claimed the gray gelding, How About Him, on May 12, the 95 members of the inaugural Prairie Meadows Racing Club (the Club) had been patiently waiting for their horse’s big debut.

On Saturday, May 27, How About Him competed in his first race as the Club’s horse. He faced seven rivals in the ninth race at Prairie Meadows with jockey Ken Tohill riding and sporting the Club’s lime green and pink silks.

How About Him broke quickly from his number 8 post position, sprinted to a three-length lead, and finished strongly to win the 5 ½-furlong race. The 5-year-old gelding finished two lengths ahead of runner-up, Gentleman Len, and recorded a time of 1:04.2.

“He drew a good post position on the outside,” said Von Hemel. “I told Ken (Tohill) to do whatever he thought was best. How About Him broke better than the others, Ken took him to the front, and that’s where you want to be running – on the lead.”

How About Him finished second with Tohill riding when the Club claimed him on May 12. Tohill’s agent, Gene Short, made it clear to Von Hemel that the jockey wanted another chance. Von Hemel granted Tohill’s wish and the veteran reinsman – with over 3,600 lifetime victories – rode How About Him to victory.

“I saw that the track was good for the front-runners that afternoon,” explained Tohill. “When How About Him broke well and got the lead, I just grabbed a handful of mane, sat tight, and let him do his thing.”

Tohill called it “one of the gifts of the game” to be part of the Club’s winning debut.

“They wanted to shake my hand, they asked me to pose for quite a few photos,” he added.

The jockey credited trainer Von Hemel for his work in preparing How About Him for the race, “Kelly did a great job with him in a short time. He had him ready to run a good one!”

On the morning of Wednesday, May 31, How About Him returned to the track to gallop for the first time since his victory.

“He’s doing well,” noted Von Hemel. “He’s a wise veteran who knows what to do in the mornings and what to do when it’s race day. I’m already looking for his next opportunity as I see what races open up over the next couple of weeks.”