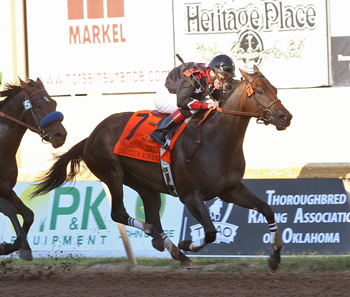 Shotgun Kowboy, winner of the Grade 3 Oklahoma Derby on Sept. 27, will make his next start Friday night at Remington Park in the $175,000 Oklahoma Classics Cup.

The Cup is the richest event on the $1 million night of Oklahoma Classics racing, restricted to Oklahoma-bred Thoroughbreds. The first of 10 races for state-bred runners is at 7pm. The Cup is the 10th and final race of the night, slated for 11:12pm. All times are Central.

Shotgun Kowboy will become the first winner of the Oklahoma Derby to take part in any of the Classics races. The series debuted in 1993, shortly after the only other Oklahoma-bred to win the Oklahoma Derby, Clever Trevor in 1989, had concluded his racing career.

Shotgun Kowboy drew post-position two in a field of six for the 1-1/16 miles Classics Cup. He is the heavy morning-line favorite at 3-5 odds. Jockey Cliff Berry, who rode him for the first time in the Oklahoma Derby, has the return engagement and will carry 119 pounds. Shotgun Kowboy toted 124 pounds in his derby win.

C.R. Trout of Edmond, Okla. is the owner, trainer and breeder of Shotgun Kowboy. He gave his derby winner a half-mile breeze on Oct. 8 at Remington Park to ready for the Classics Cup. Shotgun Kowboy handled the effort in :52.81 seconds over a fast track.

“He’s training well, eating well and feeling good,” Trout said. “This colt is on tilt right now. Cliff gave him a nice easy breeze the other day and he’s ready. We like our draw and there are some quality horses in there so it will be a good race.”

“If everything goes well Friday night, the Clark Handicap at Churchill Downs in November is the next goal. After that, we’ll pick and choose depending on what the horse tells us.”