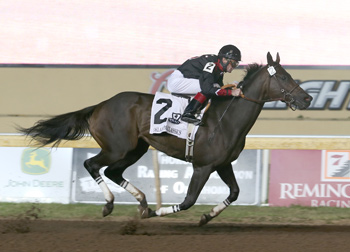 Shotgun Kowboy made history Friday night by becoming the first Oklahoma Derby winner to ever run in the Chickasaw Nation Oklahoma Classics Cup, powered by TVG. He added to his lore by winning the race under Cliff Berry, who let the gelding do his own work, never asking his mount for more.

The $1 million night for Oklahoma-bred Thoroughbreds is the night for the local stars to shine and Shotgun Kowboy continued to be brightest. Owned, trained and bred by C.R. Trout of Edmond, Okla., the 3-year-old settled second in the short field of just five for the $151,750 Classics Cup. Berry let Shotgun Kowboy track pace-setting Z Rockstar until the final quarter mile when he shook the reins and his mount responded, drawing even with his rival and then pulling away.

“My horse broke sharp and he settled off (Z Rockstar) perfect,” Berry said from the winner’s circle. “I didn’t even hit him, he finished excellent. I’m still amazed Mr. Trout let me ride this horse. He’s a blast to ride.”

“He’s just a special horse and easy to train,” Trout noted. “He doesn’t do anything wrong. He’s good, sleeps good and goes to work on the track.”

The Classics Cup is the third straight win this season for Shotgun Kowboy who has now won six of his eight career races, all of which have been at Remington Park. The race will more than likely be his final one in Oklahoma City for a while as Trout plans to take him on the road to the Grade 1 Clark Handicap in late November at Churchill Downs.

The winner’s share of the Classics Cup, $91.050, boosts the career earnings for Shotgun Kowboy to $585,044. He is by Kodiak Kowboy from the Siphon (Brz) mare Shotgun Jane.

The Classics Cup win is the fifth for Berry who now draws even with retired jockey Don Pettinger for the most scores in the race. Trout won his third-consecutive Classics Cup, having saddled Imahit to victory in both 2013 and 2014. Overall, Berry has won 26 Oklahoma Classics races, five more than Pettinger. Trout has now won eight career Classics races.

Under jockey Didiel Osorio, leading rider during the 2015 Ellis Park race meet, the 4-year-old daughter of Tactical Cat settled into fourth down the backstretch and steadily advanced to edge clear in the final strides to win by 1-1/4 lengths.

Trained by Ron Moquett, Heykittykittykitty is out of the New Way mare, Eternal Joy, bred by Diamond G Ranches of Edmond, Okla. She covered the six furlongs in 1:10.34 and earned $71,340 for owner Westrock Stables of Little Rock, Ark.

The Distaff Sprint win is the ninth from 20 career starts for Heykittykittykitty. She earned $71,340 to run her overall bankroll to $451,511.

Closing with a rush to overtake the front runners, Another Bond Girl won the $87,000 Oklahoma Classics Lassie presented by Coors Light for owner-breeders William Higgins and Brent Davidson of Grant, Okla.

Stolen Glory set most of the early fractions with Go No Go pressing her from the outside into the stretch. Go No Go eventually took the lead and it looked like the race was over. However, Another Bond Girl managed to get out of trouble, moving to the outside of traffic and finishing strongly to win by a neck under jockey Glen Murphy in 1:12.41 for six furlongs.

Trained by Davidson, Another Bond Girl won her second race from five attempts in defeating 10 other 2-year-old Oklahoma-bred fillies. She banked the winner’s share of $52,200 for her exciting finish, boosting her total earnings to $82,188.

Davidson and Murphy teamed to win their second Classics Lassie. They were also triumphant in the 2012 edition with Motivare. Overall, it was the eighth Oklahoma Classics win for Murphy.

Cliff Berry recorded his first stakes win of the evening and his 25th Oklahoma Classics victory overall. “Down the backside, she really never got a break because she always had someone on her hip and that kept her in the bit. I was a little worried but she’s a classy horse.”

A 5-year-old daughter of Stephen Got Even, out of the Dehere mare Sallybrooke, More Than Even is a homebred of Doyle Williams of Tulsa, Okla.

She had been unraced since a second-place finish in the Bob Barry Memorial Stakes at Remington Park on August 28. “This mare’s best races are fresh,” said her trainer Roger Engel. “She brings it every time. You live to train horses like this because she runs every time you lead her over.”

SECOND STAKES WIN FOR BRING IT ON DUDE IN THE JUVENILE

Bring It On Dude, the Kip Deville Stakes winner, returned to Oklahoma-bred company and dominated his 11 rivals with a front-running romp in the $89,250 Classics Juvenile.

The son of Munnings from the Sunday Break (Jpn) mare Sundayville Break is trained by his owner and breeder, C.R. Trout of Edmond, Okla. and was ridden by Jareth Loveberry.

“I knew right away that they were going to try and put some pressure on him because he’s got speed,” Loveberry said. “I had to use him a little early but by the three-eighths pole he settled and they backed off of him and turning for home he opened up. When he turned for home I just kind of shook him up a little bit, he switched leads and had another gear.”

Making a remarkable fifth appearance in the Oklahoma Classics Sprint, Okie Ride tabbed his third victory in the six-furlong race worth $118,900 for Oklahoma-bred 3-year-olds and upward.

Okie Ride is an 8-year-old gelded son of Candy Ride (Arg) out of the Geiger Counter mare Tic. He was bred by his owner, The Richter Family Trust, of John and Kris Richter, who reside in Perkins, Okla. After winning the race in 2011 & 2012, Okie Ride finished third in the Oklahoma Classic Sprint in 2013 and second in the race in 2014. He has been the betting favorite in all five of his starts in the Classic Sprint and was at 1-5 odds in this edition.

Jockey Luis Quinonez allowed Okie Ride to rate off the pacesetting Chifforobe, the 2014 winner of the Classics Sprint. Quinonez said, “I was able to lay off of Chifforobe just a little bit around the turn and then when I called on him, he really dug in and he’s okay. He’s an awesome horse.”

Kenny Nolen has handled Okie Ride since his first Classics win in 2011. “He’s easy to take care of and pretty kind to be around. He’s a gentlemen.”

The Classics Sprint win is the second for Quinonez who also rode Okie Ride in 2011. Overall, Quinonez has won 16 career Classics races while Nolen has now won four.

After a promising first two years in competition, Ibaka has endured a tough campaign in 2015 as a 4-year-old. His fortunes turned better during Friday’s $126,700 OKC Classics Turf at Remington Park, going to the lead at the start and never looking back.

Owned and bred by Doug Wall of Norman, Okla., Ibaka is trained by Bret Calhoun and was ridden by C.J. McMahon who let him roll on the lead of the 1-1/16 miles race. “Down the backside, he was well within himself. He threw his ears up and was relaxed. When I called on him, he finished for me.”

Ibaka posted a two-length win over Perfect To Please who pressured throughout from second while Runandyrun finished third, another 1-1/2 lengths back. Ibaka crossed the finish in 1:42.53 over the firm going, justifying his owner’s belief in starting him in the turf and not against Shotgun Kowboy in the Classics Cup.

“This horse was a nice horse last year but this year it hasn’t been going our way,” Wall said of Ibaka who competed in the 2014 Oklahoma Derby at Remington Park. “We put him in this race and it’s amazing. I thought the turf might be a good way to go with the Classic Cup looking tough. The turf looked more wide open but he’d never been on it before. We took a chance based on pedigree and it paid off.”

The Turf was the first Classics stakes victory for McMahon while Calhoun has now won four Classics races overall.

Zeta Zody settled back to fifth as Ridgeofstone, also owned by the Ulwellings, set off at 45-1 to open up a four-length lead, ensuring a fast face. “Tonight we had a more honest pace and the filly showed up. She ran a huge race,” said winning jockey Alex Birzer. “Mike (Biehler) did a wonderful job getting this mare ready. I was pretty confident with the 1-1/16 miles, she’s won at it before. She ran a big race.”

Trained by Mike Biehler, Zeta Zody is a 4-year-old filly by Omega Code, out of the Devious Course mare, The Penguin. She was bred by Robert Zoellner of Tulsa, Okla.

Zeta Zody covered the distance in 1:41.93 over firm turf. Away as the 9-5 betting favorite, Zeta Zody paid $5.60 to win, $3.80 to place and $3 to show. Harpers Princess rallied four-wide from seventh to finish second and pay $6.20 to place and $4.40 to show. What Lola Wants defeated Zeta Zody in her previous start but ran third throughout to pay $4 to show.

The Classics Distaff Turf is the first win for Biehler and the third overall in the Classics for Birzer.