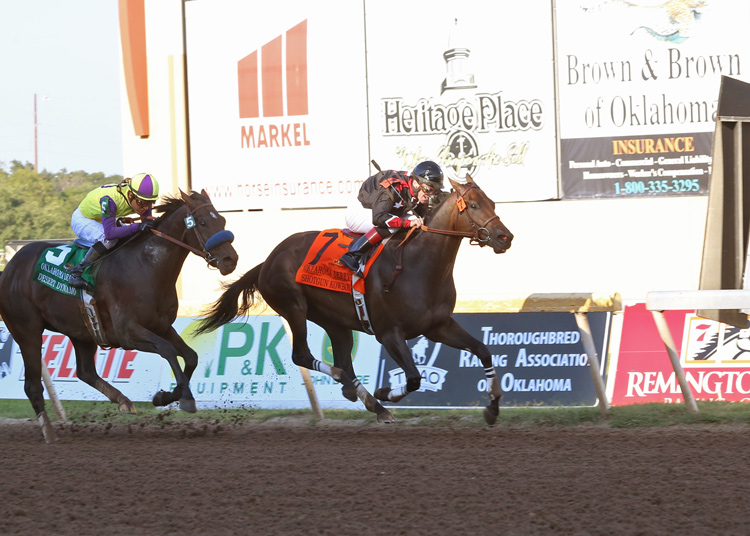 The 2017 renewal of the Oklahoma Classics has been compiled with a solid 10-race program set for Friday night. The first race on the million-dollar night of stakes action for Oklahoma-breds is at 7pm.

The $175,000 Oklahoma Classics Cup, presented by TVG, features a field of 10 for the 1-1/16 miles main event. The Cup winners from the last two years are both back, seeking their second victory in the race. Phantom Trip, the 2016 winner, will go for his second Cup in a row. Shotgun Kowboy, the 2015 winner, makes his return to the race and first start at Remington Park in over a year.

Shotgun Kowboy won the Grade 3 Oklahoma Derby in 2015 and followed that score with victory in the Classics Cup. He is the only Oklahoma-bred to achieve that stakes double. Owned and trained by C.R. Trout of Edmond, Okla., Shotgun Kowboy will make his first start at Remington Park since a second-place effort in a turf allowance in August 2016. The 5-year-old gelding by Kodiak Kowboy will be ridden for the first time by Richard Eramia.

Shotgun Kowboy is the top earner in the Classics Cup with a bankroll of $880,927. He has won eight of 20 career starts and finished third in his most recent attempt, the Grade 3, $200,000 Lone Star Park Handicap in May. Shotgun Kowboy has trained very well with a series of half-mile breezes over the past six weeks to ready for action.

Phantom Trip capped a three-race winning streak at Remington Park in 2016 by capturing the Classics Cup at 7-1 odds. The 4-year-old gelding by Summer Bird is owned by Lester Ellenz of Tipton, Kan. and is trained by Clinton Stuart. Jockey Ken Tohill will have the mount on Friday night as Phantom Trip tries to rebound from a series of disappointing races, including a pair this season at Remington Park. Stuart will take the blinkers off for the Cup, hoping an equipment alteration will spur a positive finish.

The consistent Z Rockstar is back in the Classics Cup for a sixth consecutive attempt in a race that has eluded him the previous five years. Owned by Robert Zoellner of Tulsa, Okla. and trained by Donnie Von Hemel, Z Rockstar has been the runner-up for the last three editions of the Cup, including a narrow defeat by just a neck to Phantom Trip a year ago. An 8-year-old gelding by Rockport Harbor, Z Rockstar had the lead late in the stretch in 2016 before Phantom Trip nailed him at the finish in the final two strides. Luis Quinonez will be up for another try aboard Z Rockstar who will make his seventh Oklahoma Classics start overall.

The Classics Cup is the seventh of 10 races on Oklahoma Classics Night with a scheduled post time of 10pm. The Cup will also begin the Classics Primetime Pick 4 which carries a $70,000 guaranteed minimum wagering pool for the 50-cent wager.