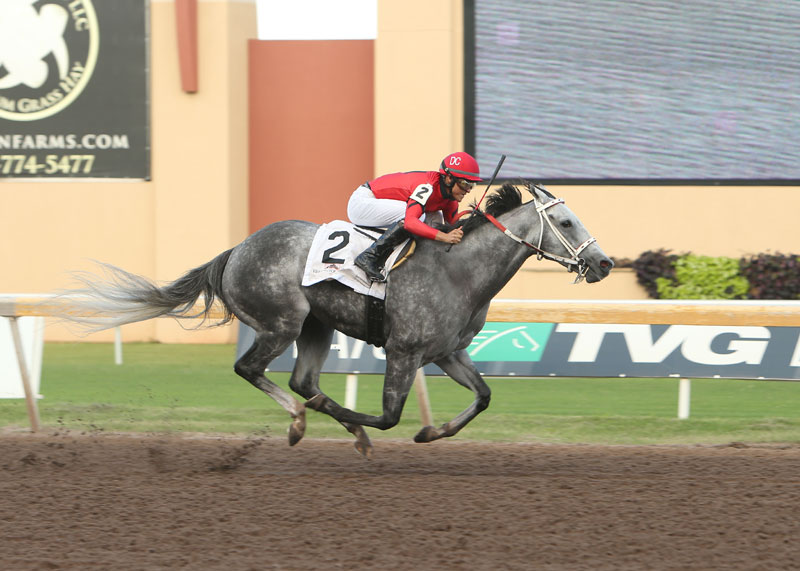 When Welder was a weanling, Clayton Rash and his trainer Teri Luneack fell in love with him at Mighty Acres Farm in Pryor, Okla. He was a punk and a rascal, according to Luneack but now he is wonderful to his owners, trainer and jockey… just mean to his competition. On Sunday, Welder left his foes to eat dust in the $165,000 David M. Vance Stakes at Remington Park.

It was a story of a local, small-farm horse, taking on all comers including horses that had raced in New York, Florida, Philadelphia and New Mexico, and turning his swift hooves to their faces, drawing off to win by 3-¼ lengths after being pressured for most of the race.

“I can’t even talk right now,” said Luneack, as she choked up in the winner’s circle. It’s no wonder she was on the verge of tears as she saw this 5-year-old gelding dig in his heels and run away from his eight rivals for an easy win, taking home $99,000 for owner Rash of Ra-Max Farms. Rash owns a welding business that sends out welders all over the world. This one he is going to keep right here in Oklahoma, however, making the cash registers clang. He spent $6,400 in a private sale to buy the gelding from Mighty Acres, the same ranch that produced multi-millionaire Kip Deville. Now Welder has lifetime earnings of $515,151.

“Despite his being a brat, now he’s just 100 percent complete racehorse,” said Luneack, who is from a small town in Michigan, and didn’t start training racehorses until 2013. “I mean, he comes here. He knows what’s expected of him. He does his job. What I think is so neat about Welder is that he can now come from off the pace, sit and then make a big run or like he did today, go with them (the front-runners) and then just leave them behind.”

Luneack’s son was living in Oklahoma when Rash talked her into moving from Michigan to run a farm for him in Chelsea, Okla. She began training show horses and then moved to thoroughbreds when Rash convinced her to switch. Welder has proven she has a winning touch with a winning horse.

Jockey David Cabrera had him right on the early pace in a duel with Wings Locked Up for fractions of :21.69 for the quarter-mile and :44.07 for the half-mile, before he stopped the timer for six furlongs in 1:08.67 on the fast track, just about a half a second off the stakes record of 1:08.19. Despite the fact most horses in that kind of a speed duel would stop and begin to fade, Welder almost looked like he enjoyed it.

“This horse likes to do things on his own,” Cabrera, Remington Park’s leading rider said. “I had a horse next to me all the way but (Welder) had his ears up and was just relaxing. He was just full of it today.”

Welder is a gelded son of The Visualiser, out of the Tiznow mare Dance Softly, bred in Oklahoma by Center Hills Farm of Springdale, Ark. Mighty Acres Farm, which sold Welder as a baby, is a subsidiary of Center Hills and is also where The Visualiser stands.

Cabrera was extremely grateful to ride Welder back after winning with him on Sept. 3 at Remington Park in the $70,000 Remington Park Turf Sprint that was taken off the grass that night.

“Before anything, I want to thank the trainer, the owner for giving me the opportunity,” he said. “I really wanted to ride this horse. I’m glad they gave me the opportunity. I think I know this horse very good. I think he knows me very good. I really just let him do whatever he wants to and he just takes me from there. He knows exactly what he is doing and he loves to win.”

Welder paid $9.80 to win, $4.60 to place and $3.40 to show, beating the 3-5 betting favorite Petrov, who could do no better than fourth after shipping in from Saratoga in upstate New York. Leadem in Ken, an outsider from New Mexico at 33-1, finished second and returned $21 to place and $6.80 to show. Rounding out the top three was Pop Keenan, an invader from Philadelphia. He paid $3.80 to show. While those three have long journeys back to their home base, Welder got in a van and headed back to Claremore.

What’s up next for Welder? “We’ll go in the Oklahoma Classics and then hopefully in the Silver Goblin,” said Luneack, of major stakes left for Welder this season at Remington Park.