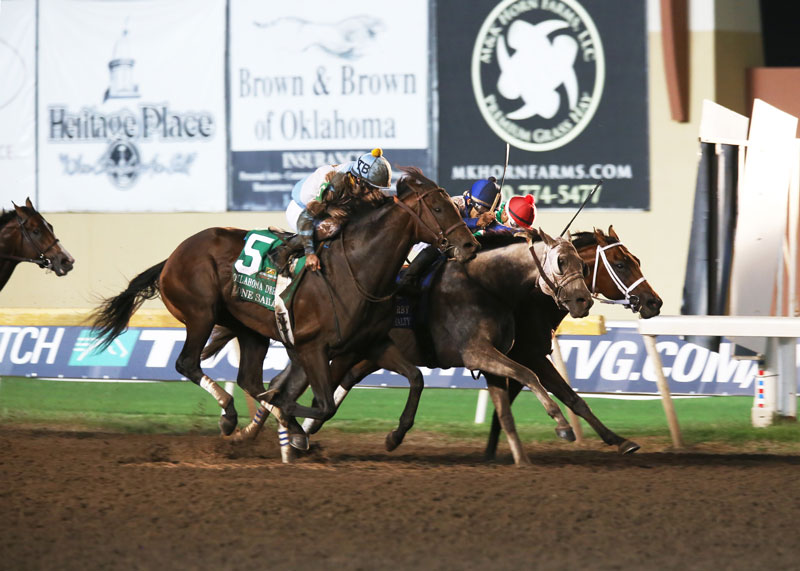 When the three top finishers hit the wire together in the Grade 3, $400,000 Oklahoma Derby at Remington Park on Sunday, you couldn’t have squeezed a couple of sheets of paper between their three noses it was so tight; not even the jockey of the winner, Lone Sailor, knew who won.

“I had no idea who of the three of us won when we hit the wire,” said James Graham, who rode Lone Sailor for trainer Tom Amoss. “But I did know this, I could feel my horse stretching his neck out, so I thought we had a chance.”

In the end, Lone Sailor’s nose was longer than both Believe in Royalty and Diamond King, who ran second and third, respectively. Lone Sailor covered the mile and an eighth in 1:49.97 over a fast track.

When it was all over, Graham was draped in flowers around his neck from head to toe and he looked skyward and screamed, “I HAVE WINGS!!!”

Then he took the Oklahoma Derby trophy and held it to his lips and acted like he was drinking in the elixir of success that he had just experienced by winning this race. The photo was so tight, it almost seemed like the three finishers were tethered together.

Lone Sailor earned $240,000 for owners G M B Racing, of Metairie, La., an ownership that has been headed up by the family of the late New Orleans Saints owner Tom Benson, who passed away in March at 90 years of age. This 3-year-old colt by Majestic Warrior, out of the Mr. Greeley mare Ambitious, now has a lifetime bankroll of $873,237 from two wins in 14 starts, with five seconds and two thirds.

Lone Sailor was bred in Kentucky by Alexander-Groves-Matz, LLC.

Although Graham wasn’t sure at the finish, he had no doubts that Lone Sailor had a big chance to win.

“(Trainer) Tom (Amoss) didn’t give me any instructions,” Graham said. “He just said that he thought this horse was continuing to get better and better. I could feel that too. He would run second and second and second, but I think now he is finally figuring it out.”

Lone Sailor had been prominent on the Kentucky Derby trail all spring, raced eighth in a field of 20 in a Run for the Roses that included Triple Crown winner Justify, and then finished third to Good Magic, the Kentucky Derby runner-up in the Haskell this summer:

“Yeah, and where are THEY (Justify and Good Magic) now?” asked Graham. “We may be the rest 3-year-old running now.”

On a day when the incredible blanket finish of the Oklahoma Derby still had the multitude of fans buzzing an hour later as they left, there was another incredible feat that happened. National Racing Hall of Fame trainer Steve Asmussen, currently the No. 1 conditioner in the country with horses’ earnings of more than $21 million this year, enjoyed a huge day with jockey Ricardo Santana, the nation’s ninth leading rider in money earned. The pair scored with five stakes winners of the 10 stakes events carded, a new record for stakes wins at Remington Park in a single day. A year ago, the Asmussen-Santana duo combined to win four stakes races on the Oklahoma Derby program.

When Santana was asked after winning his fourth stakes on Sunday whether he had another one in him for the final two stakes races remaining, he said, “I have two!”

Santana won the final stakes of the night, taking Adore wire to wire in the $75,000 Ricks Memorial at 1-1/16 miles over the turf to get the local record. Asmussen tied his mark from last year with five stakes wins. He won four with Santana in 2017 and one more with jockey Ramon Vazquez.

Even though Asmussen saddled four in the Oklahoma Derby this year, he couldn’t go back to back after winning the race for the first time in 2017 with Untrapped. Lone Sailor was just too much for his competitors – Combatant, Limation, Lionite and Retirement Fund. His best finisher was Combatant in fourth.

So, what now for Lone Sailor, who despite his strong presence on the 3-year-old stage, won only for the second time in his career?

“I’m really not sure what Tom wants to do,” said Graham. “I think he can continue to get better.”