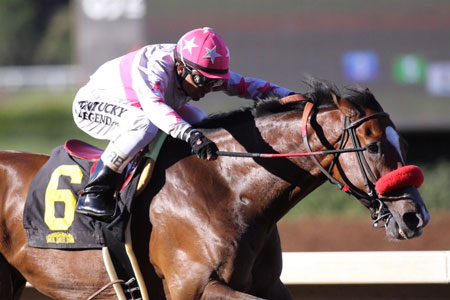 Oklahoma-bred Rockport Kat made his stakes debut a winning one as he captured the $75,000 Zia Park Sprint Stakes in New Mexico on Wednesday. The son of Rockport Harbor drew clear by 3 ½ lengths under jockey Tyler Baze to win in a time of 1:10.32 for six furlongs. The 4-year-old gelding was bred by H. Allen Poindexter and runs for owner and trainer John Sadler.

Rockport Kat sold for $50,000 at the 2013 Keeneland September Yearling Sale and then did not meet his reserve when he went through the Ocala Breeders’ Sale Spring Sale of 2-Year-Olds. The Oklahoma-bred began his career at Gulfstream Park in Florida and then broke his maiden at Del Mar in Southern California. He remained on the West Coast and won twice more, again at Del Mar and then at Santa Anita Park. Sadler claimed him for $62,500 in his last start at Santa Anita and quickly earned back $45,000 of that with the Zia victory. All told, Rockport Kat has banked $141,305 with a record of 10-4-0-0.