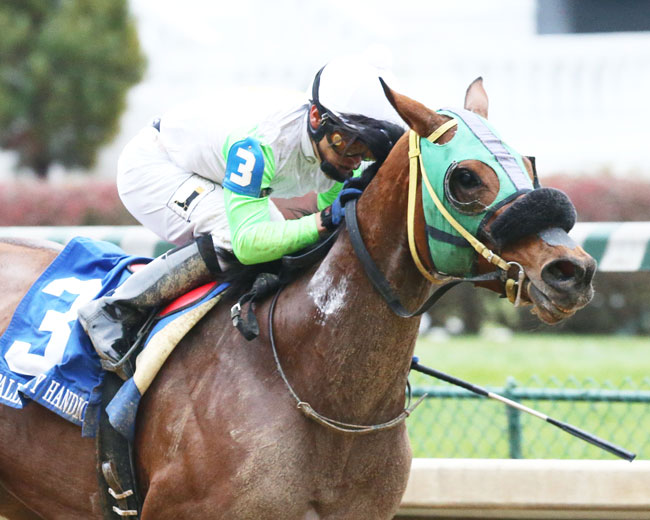 The Elkstone Group’s Indiana homebred Lady Fog Horn – the reigning Indiana Horse of the Year – sounded off against open company on Thanksgiving Day at Churchill Downs with a 1 ½-length triumph over Streamline in the 101st running of the Grade 2, $200,000 Falls City Handicap for fillies and mares.

Lady Fog Horn, trained by Tony Granitz and ridden by Albin Jimenez, ran 1 1/8 miles over a fast track in 1:50.85 to notch the eighth stakes win of her career but first outside of competition against fellow Indiana-breds.

Lady Fog Horn stalked the early pace set by She Mabee Wild as she led the field of 11 fillies and mares through fractions of :24.42, :49.18 and 1:14.27. Streamline raced in second in the clear down the backstretch with Lady Fog Horn under a snug hold down on the rail in third. Streamline drew even with the weakening leader at the head of the stretch and Lady Fog Horn was stuck in traffic awaiting room to run. A seam opened with three-sixteenths of a mile to run and Lady Fog Horn split horses and outkicked Streamline to the finish for the win.

“I saw (She Mabee Wild) take the lead and I was sitting in behind nice and easy,” Jimenez said. “My horse came down the stretch nice and strong. I thank God first and a thank you to the owner and the trainer and all the people that are involved.”

Lady Fog Horn, who carried 117 pounds during the victory, is a 4-year-old daughter of Zavata out of the Northern Spur (IRE) mare Titia.

Lady Fog Horn scratched out of last Saturday’s $100,000 Cardinal Handicap (G2) on the turf in favor of Thursday’s Falls City.

“It was a tough call scratching her last week because we had run second in the Cardinal Handicap last year and she was doing so well,” Granitz said. “We were trying to make the right decision and it was a last minute one. Albin couldn’t ride her last Saturday. He had to ride in a stakes race in Ohio so I said, ‘I want her regular rider to come and ride her,’ and we knew today he could do that. It was a tough call and this was a big move for me to scratch her out of the race last week to put her in here.”

Prior to the Falls City, Lady Fog Horn won the $150,000 Frances Slocum at Indiana Grand on Oct. 29 for the second consecutive year – one of her six stakes victories over that track during the past two seasons.

The Falls City is the traditional main dish on the Thanksgiving Day menu at Churchill Downs – a Louisville tradition since 1969 where more than 7,000 turkey dinners are served with all the trimmings, making it the largest number anywhere in the region.