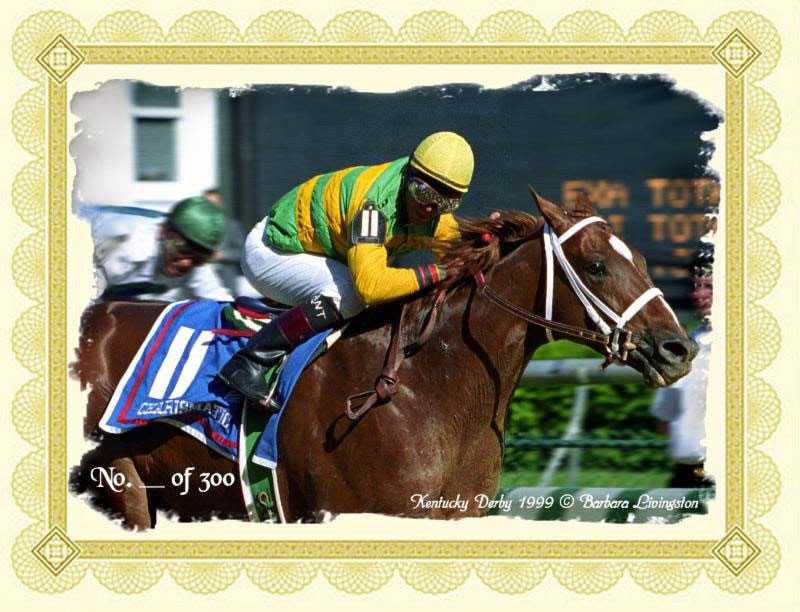 On October 26, Old Friends announced that the dual-classic winner and 1999 Horse of the Year would be returning to the United States from Japan, where he has stood as a stallion since 2002.

Today, Old Friends is launching a “Certificate” campaign to support Charismatic’s overseas journey. The lion share of his trip is being sponsored by his former owners through the Robert & Beverly Lewis Family Foundation, and also by the Austin, TX-based vodka brand, Tito’s Handmade Vodka. But additional funds are still needed.

“In 2015 we launched a certificate campaign for the return of Derby winner War Emblem, and it was a great success,” said Old Friends President Michael Blowen. “Since announcing the news about Charismatic we have received so many calls and requests about doing it again–so the certificates are back by popular demand,” Blowen added.”

Fans who donate $199.90-a nod to Charismatic’s 1999 Derby win–will earn a limited-edition share certificate featuring a four-color photo by Eclipse-Award winning photographer Barbara Livingston and a personal signature from Hall of Fame trainer D. Wayne Lukas, who campaigned Charismatic throughout his career.

Certificate holders will be also invited to a private meet-and-greet reception at Old Friends to be held in April of 2017 (exact date to be announced by January).

Only 300 certificates will be produced.

Charismatic, a one-time claimer, captured the hearts of racing fans when he miraculously won both the Kentucky Derby and Preakness stakes against all odds. He found himself on the threshold of becoming the 12th Triple Crown winner when near-tragedy struck during the Belmont Stakes.

In that race, Charismatic surged before record crowd of over 85,000, but then he dropped back and was passed by eventual winner Lemon Drop Kid. As Charismatic crossed the finish line in third place, he was quickly pulled up having suffered multiple fractures in his left front leg.

In a very memorable moment, his jockey, the late Chris Antley, jumped off and held the colt’s leg off the ground until help arrived, thus avoiding more serious damage. As Daily Racing Form’s Jay Hovdey noted at the time: “The Triple Crown was lost, but Charismatic was saved.”

The injuries, while not life threatening, did end his racing career. But Charismatic earned that year’s Eclipse Award as Champion 3-year-old colt as well as Horse of the Year honors, and retired with five wins from 17 starts and earnings of $2,038,064.

The now 20-year-old stallion will return to the United States in early December (arrival date to be announced) and will be pensioned at Old Friends. This marks the third Kentucky Derby Champion to be repatriated from Japan by Old Friends. In 2014 the farm welcomed 1997 winner Silver Charm and the following year 2002 winner War Emblem.

Certificates are expected to be mailed by late December.