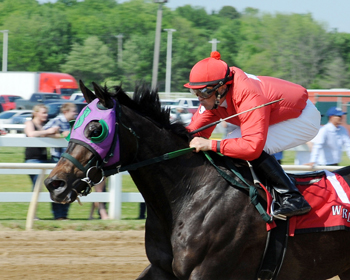 Will Rogers Downs on Saturday hosted a pair of Oklahoma Stallion Stakes for 3-year-olds with Okey Dokey Kyle taking the colts and geldings division and Zealous Vision scoring in the fillies division.

In the $55,000 colts and geldings division, Lori Bravo and Ann Sachdev’s homebred Okey Dokey Kyle broke on top and never looked back while easily winning by 9 ¼ lengths with Bryan McNeil up for trainer Francisco Bravo. The gelding by Raywood Farm stallion Tactical Cat ran a mile in 1:38.15. Okey Dokey Kyle began his career last October at Remington Park with a 43-1 upset win against maiden claiming company and then he stepped up in class to win a division of the Oklahoma Stallion Stakes the next month, also at Remington. He is now a perfect three-for-three after his 3-year-old debut and has banked $76,439. His three wins have come by a combined margin of 16 lengths.

The $55,000 fillies division featured Center Hills Farms and Big Sugar Racing LLC’s Zealous Vision getting up to win by a head. The daughter of Mighty Acres stallion The Visualiser also won the Oklahoma Classics Lassie Stakes at Remington Park last year. Ridden by Bryan McNeil for a stakes sweep and trained by Scott Young, Zealous Vision clocked a mile in 1:40.35 for her third win in nine starts. Bred by Center Hills Farm, she has earned $119,665.

Another daughter of a Mighty Acres stallion took second as Center Hills Farms’ Vivid, by Save Big Money, closed fast to just miss the victory. Clark Brewster’s homebred Fly Above it All, by Rockin’ Z Ranch stallion Omega Code, set the pace and gamely held third.