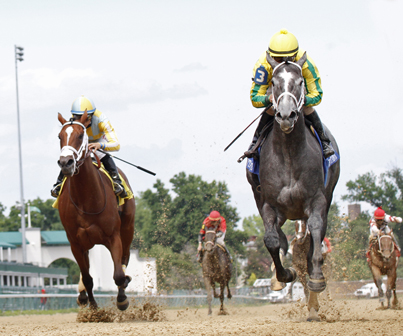 While American Pharoah and Floyd Mayweather both delivered knockout punches on the racetrack and in the boxing ring on Saturday, Texas-breds also scored some major wins with two graded stakes victories and two open stakes wins. The action started on Friday when Promise Me Silver won the Grade 3, $200,000 Eight Belles Stakes at Churchill Downs on the undercard for the Kentucky Oaks. Then later that night, Texas Air pulled off a big upset in the Grade 3, $200,000 Texas Mile Stakes at Lone Star Park. Also on Friday, A M Milky Way captured the $75,000 Golden Circle Stakes at Prairie Meadows, and then on Saturday Reflector won the $60,000 Need for Speed Stakes at Evangeline Downs.

In the Eight Belles, Robert Luttrell’s homebred Promise Me Silver, a 3-year-old daughter of Valor Farm stallion Silver City, ran her record to a perfect eight-for-eight as she defeated a quality field of runners going seven furlongs.

“She’s a special filly,” said trainer Bret Calhoun, who also won last year’s Eight Belles with Texas-bred Fiftyshadesofgold, also by a Valor Farm stallion, My Golden Song. “I can see why she was overlooked (at odds of 5-1). She had never beaten this caliber of fillies before, but we always knew she could. We will start making plans for that race (the $750,000 Acorn at a mile) on Belmont Day (June 6).”

Promise Me Silver has now earned $435,915 with seven straight stakes wins after breaking her maiden at Lone Star Park. This was her first graded stakes but she has four other open stakes wins at Oaklawn Park, Fair Grounds and Churchill in addition to a pair of Texas Stallion Stakes wins at Retama Park and Sam Houston Race Park.

At odds of 24-1, Texas Air prevailed in the 19th running of the Grade 3 Texas Mile tonight at Lone Star Park over a fast main track.

Rise Up went straight to the lead from the gate with favorite Sr. Quisqueyano taking up the second place position, and that’s how it played out through the second turn where Sr. Quisqueyano tired. Texas Air settled in nicely off the pace into the backstretch, went four wide in the second turn, then rallied into the final furlong making a bid at the sixteenth pole and prevailed under strong urging.

“The race was really put together for me, and all I did was point him in the right direction,” said winning jockey Quincy Hamilton. “We got clear at the top of the stretch, and I knew I was really well mounted at the top and just ran it on home. I couldn’t have been more confident in him tonight for sure.”
Bred and owned by Paul J. Rigali Jr. of Eustace, Texas, the 7-year-old gelding by the late stallion Texas City was one of only two Texas-bred horses in the race.

“Let’s hear it for Texas,” exclaimed Rigali after the race.

The Texas Mile win upped Texas Air’s career earnings to $341,774. This was his eighth win from 39 starts.

“He just gets better with age,” said winning trainer Allen Milligan. “The older he gets, the better he gets. Quincy rode him perfect. He did everything exactly like I asked him to do it. It was perfect.”

At Prairie Meadows in Iowa, A M Milky way scored his second career stakes win and first against open company in the Golden Circle for 3-year-olds. The gelding by Elusive Bluff runs for breeder David Davis and banked $44,700 for the win to push his earnings to $132,100. The Texas-bred kicked off his 2015 season with a win in the Groovy Stakes at Sam Houston. Karl Broberg was the winning trainer.

On Saturday, Preston Stables LLC’s Reflector picked up his first career stakes win in the Need for Speed Stakes going five furlongs on the turf. The 4-year-old colt by Ready’s Image came from last to win with Diego Saenz in the irons for trainer Patrick Devereux Jr. Bred by John T.L. Jones Jr., Reflector has a record of 13-4-2-2 with earnings of $124,935.