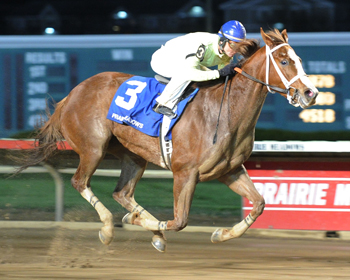 After posting two impressive wins at Oaklawn Park, Indiana-bred I’m Workin On It stepped up to stakes company in the $75,000 Goldfinch Stakes on April 25 at Prairie Meadows and scored a decisive three-length win. Bred by B.A. Man Inc. and Richard Maynard and owned by William Oswald, the filly by the Pulpit stallion Quein was ridden by Alex Birzer for trainer Lynn Chleboard. The Indiana-bred earned $44,400 for the win to push her earnings to $123,900.

I’m Workin On It debuted at Oaklawn Park on March 12 and the 3-year-old posted an impressive win against maiden special company while scoring a 14-1 upset. She then stepped up to allowance company in her next start in Hot Springs and scored another daylight victory for a $68,500 purse. She is out of the Honour and Glory mare With a Passion.