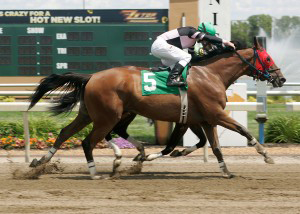 At the age of ten, Stalwart Tee is proving that age is only a number. The Lil E Tee gelding will make his second start of 2015 when he steps into the starting gate at Indiana Grand Tuesday, May 12 in the first race of the day, which has a post time of 2:05 p.m.

Trained by Kim Hammond, Stalwart Tee is better known as the “gentle giant” around the barn. Standing well over 17 hands tall, the big horse has been with his current connections, Hammond and owners Jerry Carden, since June of 2013 and has found a home for the remainder of his life.

“He (Stalwart Tee) is just a neat old horse,” said Hammond in an interview last year at Indiana Grand after one of two wins he had on the year. “He’s real quiet and like a gentle giant. When I saddle him, his withers are way over my head. He spends a lot of time at the farm because he’s older. Standing in a stall doesn’t agree with him very much.”

Hammond purchased a farm in Shelby County several years ago and Stalwart Tee takes advantage of pasture time between races. With the exception of one race at the end of 2014, Rodney Prescott, Indiana’s all-time leading jockey with 619 wins and nearly $10 million in purse earnings recorded at Indiana Grand, is the regular rider aboard Stalwart Tee. Prescott will once again be aboard Stalwart Tee on Tuesday from post six, which will mark the gelding’s 81st career start.

“He (Stalwart Tee) is huge and is kind as can be,” said Prescott. “He is a horse that really loves his job. He’s a pleasure to ride, and there isn’t a mean bone in his body. He will let you do whatever you want him to do when riding him. He’s raced both ways. He’s been close and he’s been way back. He’s very versatile and it just depends on the pace of the race as how I ride him.”

Stalwart Tee is the son of Lil E Tee, winner of the Kentucky Derby in 1992. He was bred in the state of Indiana by Tony Shuler’s Pine Creek Farms and has spent a majority of his career racing in Indiana. He has raced over five tracks during his lifetime and has been piloted by 31 different jockeys over the years, winning under 12 of them. Although he prefers the route races, he has won at shorter distances. Stalwart Tee has been claimed three times and since arriving at the Hammond barn, has won five of 13 starts. In all, he has 80 career starts with 21 career wins and just under $200,000 in career earnings. Nine of those wins have been recorded at Indiana Grand and he has not missed a year of racing since he began his career as a two-year-old in 2008 at Hoosier Park.

In his first start of 2015, Stalwart Tee stayed close to the pace the entire one-mile race to finish fifth, beaten only three and one-half lengths for the victory. He will meet up with Roll N Shine (Alberto Pusac) and Flyin Trey (Israel Ocampo) who finished second and third, respectively in the previous race.

Hammond is horse racing’s all-time leading female trainer in wins. She recorded her 2,000th career win in early 2014 at Turfway Park. She is ranked fourth on the list of all-time winning trainers at Indiana Grand with 189 career wins. Hammond, who is a second generation trainer that followed her father, Everett, into the business, will start a second horse in the first race Tuesday. Folowthemoneytrail, who will be ridden by Malcolm Franklin, will start from post seven in the seven-horse field.

The 13th season of live Thoroughbred and Quarter Horse continues through Saturday, Oct. 31, 2015. Racing is conducted Tuesdays, Wednesdays and Fridays at 2:05 p.m. with first post for Saturdays set at 6:05 p.m. Thursday racing will be added Sept. 17, 2015 for the remainder of the 120-day race meet. The track’s signature event, the Grade II $500,000-added Indiana Derby, will be held Saturday, July 18.