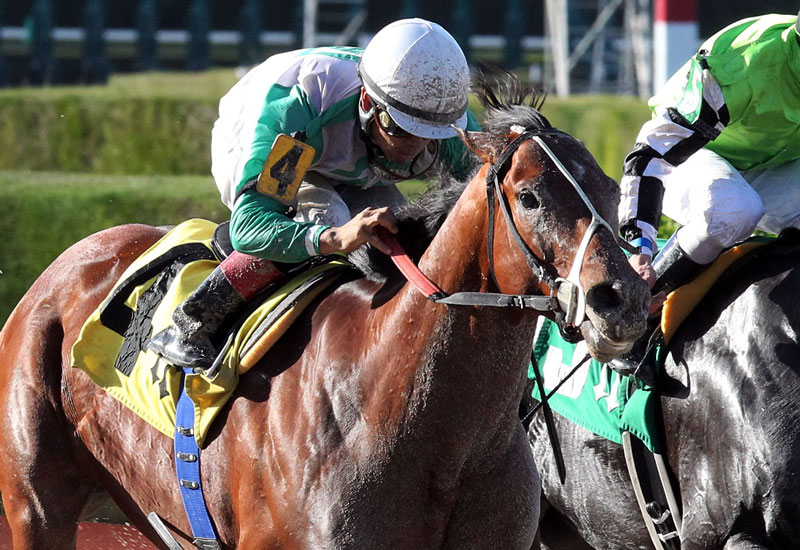 Csaba, one of the top dirt runners by leading stallion and champion turf horse Kitten’s Joy, will stand the 2018 breeding season at R Star Stallions in Anderson, Indiana. He will stand for a fee of $2,000 live foal with considerations for stakes mares and stakes producers.

Bred by Kenneth and Sarah Ramsey out of the War Chant mare High Chant, Csaba won 13 of his 36 career starts with eight stakes wins and earnings of $682,440. A two-time winner as a 2-year-old, Csaba notched four stakes wins during his 3-year-old season by a combined total of more than 33 lengths, including a 14-length win in the Tropical Park Derby and a 7 ¼-length score in the Grade 3 Fred W. Hooper Handicap, both on the dirt at Calder Race Course.

He kicked off his 4-year-old season with another graded stakes win in the Grade 3 Hal’s Hope Stakes on the dirt at Gulfstream Park, and then ended his four-win campaign with a repeat win in the Grade 3 Fred W. Hooper Handicap. As a 5-year-old, Csaba added two more stakes wins.

While nearly all of his races were on the main track, he proved he could also run on the turf with a third in the Grade 3 Palm Beach Stakes on the Gulfstream grass.

“We think Csaba is unique because he was so versatile, winning from five furlongs to a mile and an eighth. Csaba excelled on dirt while also having a remarkable turf pedigree as a son of Kitten’s Joy,” said Leigh Ann Hopper, who owns and operates R Star Stallions with her husband, Kerry. “We were also attracted to the fact that he made at least 10 starts with no less than two stakes wins each year on the track from ages 3 through his retirement at age 5.”

R Star had earlier announced the addition of $2.2 million earner Prayer for Relief to the 2018 roster, joining Deputy Storm, Taprize and What Now.