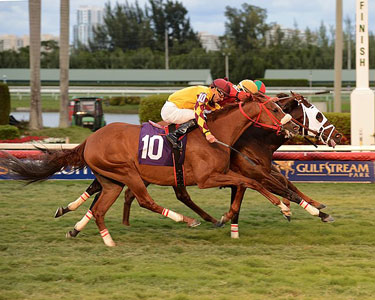 Broughton Farm in Odessa, Texas, has announced the addition of Live in Joy to its stallion roster for the 2018 breeding season. The son of champion turf male and leading national sire Kitten’s Joy will stand his first season for an introductory fee of $1,500, with a $500 discount to Texas-bred mares and a limited book.

Live in Joy enjoyed a long and productive career on the track with a record of 12 wins, eight seconds and eight thirds while earning $329,916 and racing through age 9. He kicked off his career with a victory at first asking as a 2-year-old going five furlongs on the turf at Arlington Park, and then as a 3-year-old he captured the Listed $100,000 Capital City Stakes at one-mile on the turf at Penn National Race Course. After a short three-race campaign as a 4-year-old, he went on to win at nine more races at ages 5 through 8.

The farm also announced that 10 percent of any stud fees paid will be set aside in a trust fund for any foal bred on the farm to cover aftercare and retirement in the future.